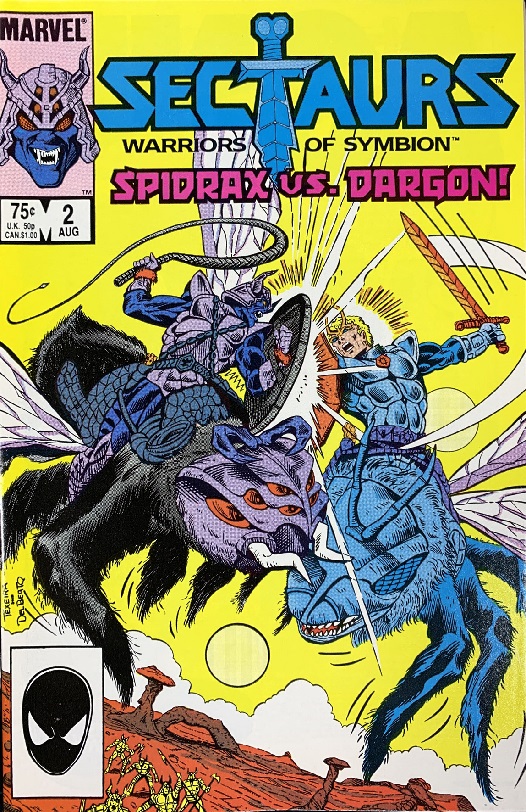 Dargon and company are about to head out so that they might discover what sent the strange weather that ravaged the Shining Realm though they know that somehow the Dark Domain is behind it when his uncle, Regent Galken intercedes. Writer Bill Mantlo begins the book with a bit of family drama which ends up being a little strange as Galken does not believe the Dark Domain to be involved in any way and the way he goes to defend them and put sanctions on Dargon makes readers wonder if he is not secretly in bed with them, so to speak. That being said, they head to Pinsor’s village, not necessarily looking for the vile Keepers that Galken wants them to find, simply to discover whatever it was that caused the havoc no matter who they might be. Elsewhere, Mantlo spins some dark designs involving Empress Devora, Spidrax, Waspax and Skulk, all who have plans of their own and none of them any good for the heroes of the story. Spidrax is looking for power and he means to get it no matter the cost. Devora knows this and so is allowing him free reign to do as he pleases for when he does find it, she will step in to take it and finally rule all there is, not just the Dark Domain. As it is, Dargon and his men arrive at the small village which is trapped in a poison cloud called Meander, released after the strange weather happened thanks to the tampering within the Keeper’s Hyve. Also arriving on the scene are Spidrax and his men and as anyone might have been able to guess, they end up fighting, at least Dargon and Spidrax. They battle over the Sentinel plant, the only thing that will allow them through the Meander and into the Hyve where they hope to find whatever power remains. All of it ends with Dargon claiming the plant as his own as Spidrax vows revenge and so it is that the heroes head into the smoke to see what they can see, not only finding the people still alive and safe from the poison but Mantys discovering the Hyve and putting a stop to that which threatens them all. The book ends with Mantlo and artist Mark Texiera raising a number of questions such as when and where the villains will strike next, what is up with Galken and what will Dargon and company do next. For readers, this was a great read from start to finish and it will be interesting to see where it all heads next.