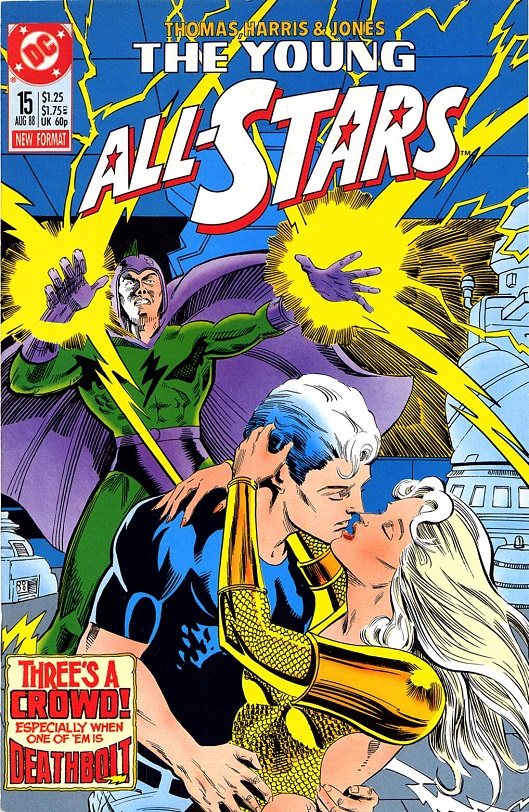 Roy Thomas and Ron Harris start the fifteenth issue of the book off with a bit of fun as it finds the ladies of the team deciding to have a little race and while they are not technically racing against each other as informed by Liberty Belle, how could they not? Soon the book gets a little more serious as it finds the team studying as they still need to graduate high school and when a chance presents itself to do a little partying later that night, Arn backs out, uncomfortable with the advances of Tigress as he has feelings for another on the team, that being Fury. Thomas and company have been teasing readers with Munro and Fury getting together and in this issue, it finally happens, sort of that is. While it looks like it might be headed somewhere, after a short battle with Deathbolt, Arn gets a call from Dr. Midnite who tells him he has a mild case of V.D. and Arn is devastated as he was just about to spend the night with the woman he loves. What follows is teenage drama and a bit of awkwardness as Arn tries to dance around the issue and the next day when they are about to take their finals, he skips out because he simply cannot handle it. Thankfully Flying Fox talks him down, the tests are taken, graduation happens and Fury comes to understand with Arn feeling better about it all. Though this might not have been the conventional superhero outing – with there being very little in the way of action or fisticuffs, Thomas still manages to move the story along, more specifically the one between Arn and Helena. The characterization is great and Thomas does a great job at handling the complex relationships between all of these young people who not only have to deal with their hormones, with school and their personal lives but the war going on around them and the fact that they are also superheroes who sometimes have to do battle with other costumed people. An enjoyable and entertaining issue from start to finish.