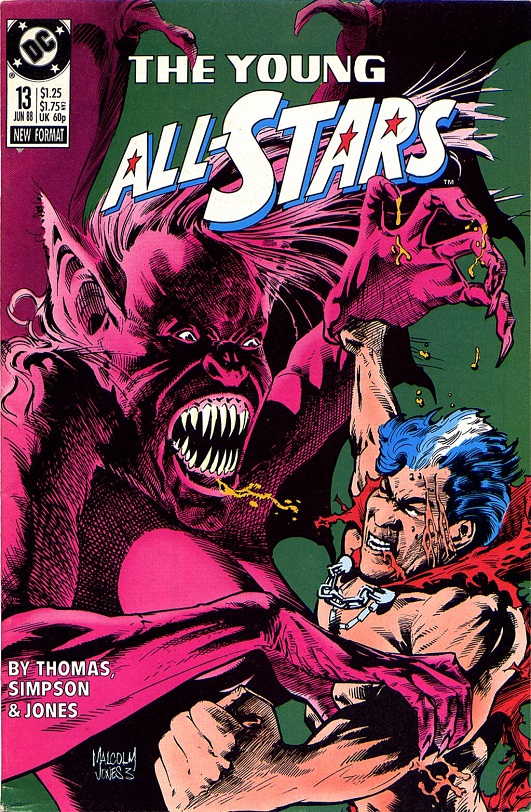 Things have not gone according to plan for the Young All-Stars who were just looking to perhaps find a cure for Fury, to rid her of the monster that resides deep within her. When the book opens, the team is facing off against the Ultra-Humanite in the body of a Tyrannosaurus Rex and despite being a little overwhelmed and more than a little flabbergasted at the sight, the team gets right to it in trying to take the creature down. While this is going on, Arn ‘Iron’ Munro is trying to make sure none of the machinery that Fury is attached to is disturbed for she is in the middle of treatment and should that happen, not only is failure quite possible but Fury may not survive it. Suffice it to say, author Roy Thomas heads right down this road and the battle that is taking place interrupts the process and unleashes Tisiphone, the Blood Avenger. As it is, the battle takes a turn for the worse and both the Ultra-Humanite and the Blood Avenger escape. leaving the heroes buried behind some machinery which Prof. Mazursky blames them for with a little needling from Degaton. Arn is beside himself with worry, and Thomas shows readers just how much the man cares for Fury during the last third of the book as he takes off after her, not only hoping to stop the Ultra-Humanite from doing whatever it is he plans to do but to save the woman he loves, though he has not quite openly admitted to saying as such. It is a frantic Iron Munro that is painted during this last bit and not only that, he is frustrated too, not simply due to the fact that he cannot find Fury but that he has no idea how to help her. Tisiphone and Arn do come into contact once again, the latter hoping the former can still transform back into Fury but that is denied by the monster who shreds Iron Munro open as if his invulnerability was nothing stronger than a piece of paper. Howard Simpson does a great job on the book, his artwork getting better and better as it moves along with every passing issue and it is good to see as his style really seems to fit the subject matter. As for the rest of the team, they get kicked out of Project M and as for their next move, it remains to be seen. There also remains the problem of Degaton, Deathbolt and the Ultra-Humanite. A good read all-around.