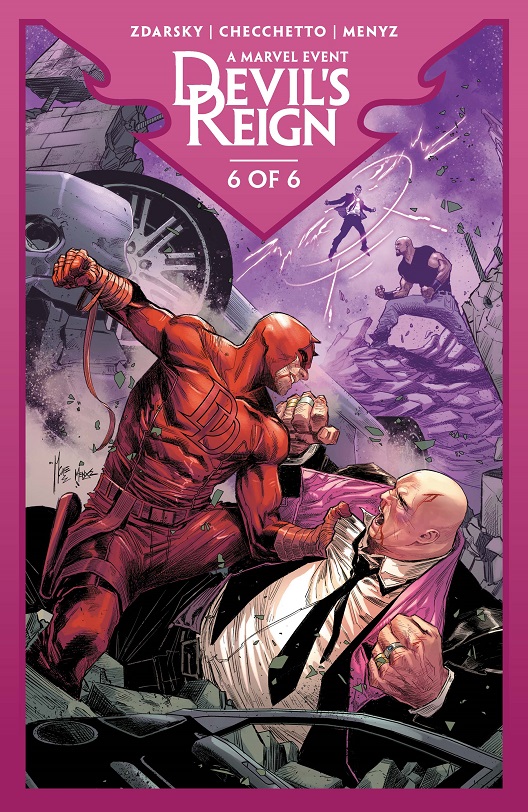 The Story – The Kingpin has killed Matt Murdock to the shock of everyone but not all is as it seems.

The Take – Marco Checchetto and Chip Zdarsky bring it all home in this final issue of this Marvel event and it wraps up a story that has been brewing from the first of their Daredevil run. As seen in the previous issue, the Kingpin has killed Matt Murdock or at least who he thought was Matt Murdock, knowing that he and Daredevil were one and the same and thereby putting all his demons to rest – as it were. Suffice it to say, Zdarsky and company would not make things so easy for the Kingpin nor for the heroes of the story who are facing off against an entire city of mind-controlled people thanks to the Purple Man whose powers have been greatly enhanced. This book, while a Daredevil feature is just as much a story of the Kingpin and while it is interesting where the former is concerned, it is far more fascinating when it comes to the latter. Having risen up to be the mayor of New York City, Fisk should have been content and then having married the woman that he loves in the form of Typhoid Mary, he should have been more than content. Something nagged at him though, the thought that he was missing something within, memories that were no longer there and that he could not let go of. It was a violation and he knew that somehow, Daredevil was behind it and thus where he and Daredevil and readers find themselves now. The events that take place of course lead into the new Daredevil series, whether it is the recently launched book starring Elektra or a new one featuring the Man Without Fear remains to be seen but there have been hints as to the direction it will take and that seems to be where it is indeed going. As for the Kingpin, the man gets his happy ending which might be a bit of strangeness to readers who might have expected something a little different but one thing that they can be sure of is that happy ending or not, this is not the last of the Kingpin as something will bring him back at some point and that will not be a good thing for anybody. Checchetto makes the book look far prettier than most, his artwork truly phenomenal to look at while Zdarsky weaves a fantastic tale that thrills from start to finish. Devil’s Reign has definitely been one of the best events to come from Marvel in the last few years.