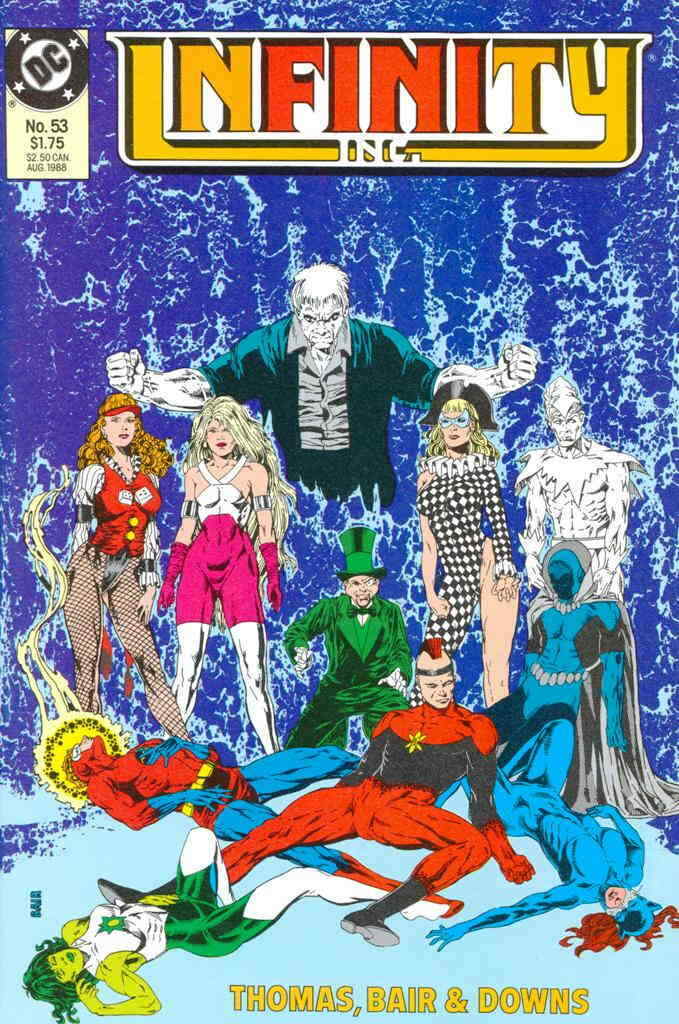 The final issue of Infinity Inc. finds the team in a bad place, especially Pat Duggan who is trapped with three members of Injustice Unlimited along with his son. They mean to kill him and the boy and there is nothing he can really do about it. Thankfully, with a bit of quick thinking from the two of them, they hide and contact the Infinitors so that they might save the day. Roy Thomas and Michael Bair wrap up the entire series with this issue and they do a great job of it as the Infinitors face their greatest threat yet and perhaps the only villains to really pose a threat in any manner given everything that has happened in the past. There is a lot that goes on in these pages like Jade who tries to save Brainwave from his own subconscious and his death that is sure to follow if she is not successful. In this instance, Obsidian saves the day which gives him one final moment to shine in the series before the three heroes rejoin the rest of the team in saving Duggan and defeating Injustice Unlimited. Along for the ride is Mr. Bones who was not going to rejoin the team given the events in the previous issue but as he had nowhere else to go, he stowed away on their ship and helps the team out when they need it the most. There is a ton of action in this issue which is always a good thing as it keeps things moving along and it, along with the last few books, is one of the best in the entire series. It feels as if things matter, like the team is finally acting like one, all that hampered them in the past gone with a real-life or death threat to really bring out the best in them. It is a bit of a shame that it took over forty issues of this title for the book to finally hit its stride, there being so many sub-par issues whether it be in terms of story or artwork, crossovers shoehorning their way into the title or what have one. The book had a lot of potential as evidenced by the tail-end of this run, Thomas and company really killing it as the series counted down to this issue. If there were anything to make one miss this title, it would be these last issues and as it leaves off, it manages to tie a number of things up but it does leave a lot open, most of it never to be realized. At some point, there was to be an ongoing Helix series that would never see the light of day and perhaps that is a good thing as they ended up being one of the worst things this title had to offer, their only redemption being Mr. Bones. As a whole, the series had its ups and downs and was good overall but this issue, this final issue, was great.