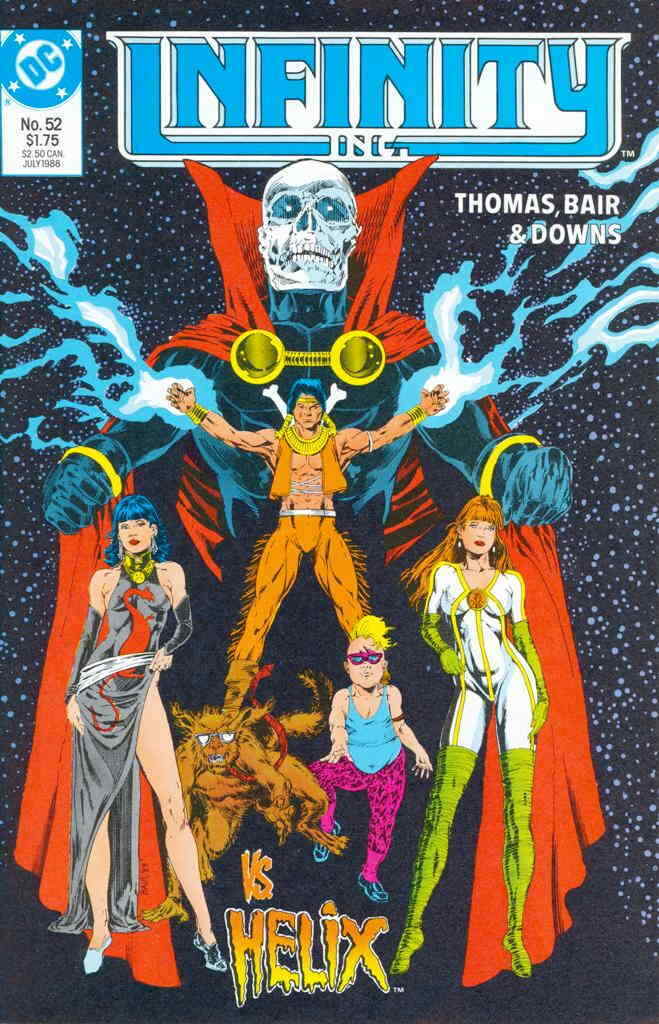 The Infinitors are out searching for Solomon Grundy after the death of Skyman, trying to deal with their feelings of the latter while knowing they have to put a stop to the former. As Jade and Brainwave search the city, they think they’ve found Grundy and find themselves attacked by Artemis instead and the villain is playing for keeps. Just when Brainwave looks to go on the offensive, he is stopped in his tracks by Icicle who also arrives on the scene showing that Injustice Unlimited is looking to rid the world of the Infinitors. Back at headquarters, Stripesy is confronted by Harlequin, Hazard and The Dummy and readers find that the bad guys are looking to not just take the heroes off the board, they are looking to do it in a very permanent fashion. Roy Thomas, Michael Bair and Lou Manna present quite an exciting tale and it turns out to be yet again, one of the best issues in the series. The action is great and seeing the villains not only on the offensive but so decisive and determined to take out Infinity Inc. is refreshing and it makes it seem as if they have an actual chance instead of being the jokes that they usually turn out to be. The rest of the story finds the remainder of the Infinitors heading to the clinic upstate where the members of Helix have been for quite some time. They tend to the gardens and do menial work as if they have no mind of their own and it is soon discovered that their former creator and master is still alive and controlling them. It is not long before the Infinitors are captured and it is just as Mr. Bones, the person whom they had been searching for, finally arrives on the scene after reminiscing about his life. That leads to a confrontation between him and his former team in order to protect those he has found a home with of late and it ends up being a bit of tragedy for Bones when all is said and done. Thomas does some excellent work with the various characters in this book, both hero and villain alike and it makes one wish that he had written the previous fifty or so issues just like this one, as sure and as strong as he does here. With one issue to go, it makes readers sad to think about it but it was an interesting ride up until this point.