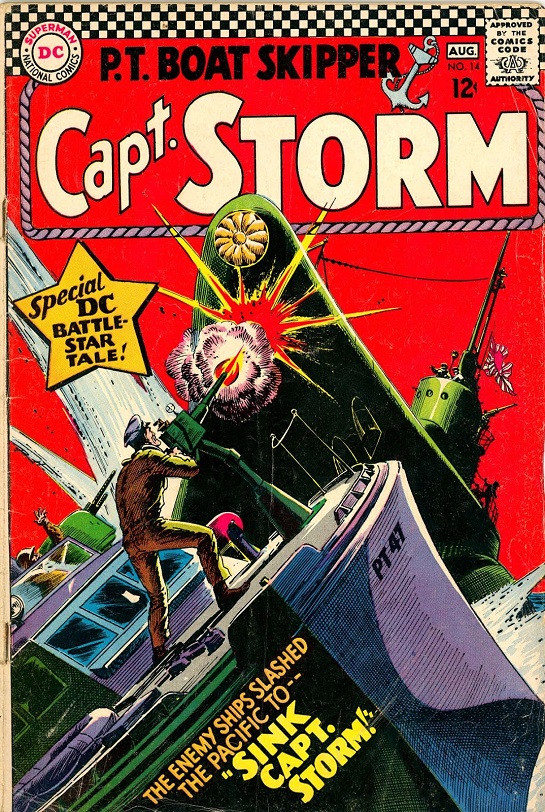 Capt. Storm is not having a good day and to be fair, the man is in a war and it is probably a fifty-fifty chance of anyone having a good day. It all begins as PT 47 is overwhelmed by enemy frogmen and yet, even though the crew is somewhat surprised by this attack, they still manage to fend it off, sending the enemy back to the deep. After that, an enemy vessel is spotted in the distance and Storm takes the battle to the Japanese ship as fast as he can for he knows that they will be doing the same. As luck and skill would have it, Storm and his men sink the ship but as it sinks, it sends out an SOS calling for the destruction of PT 47, not knowing that there was a Japanese Admiral onboard their target. Soon enough a Japanese Zero has honed in on them, looking to crash his plane into Storm’s ship and somehow and with enough firepower, they are able to take it down though not without incurring some damage. Robert Kanigher sends the men home while repairs are made and then ships them right back out where they encounter a friendly looking for a little protection while they make some repairs. Storm agrees to help and encounters an enemy sub which he takes care of but not before its partner ship takes out his own ship. So it is that PT 47 is lost beneath the waves once again which at this point, while still sad is almost comical at how many times it has sunk. Storm and his men are taken aboard the Japanese ship where Storm escapes and a man plan comes to mind, one that will find him having to make the hardest decision of all. This story was definitely a return to form for Capt. Storm and it is good to see Irv Novick back on board to pencil the man’s adventures. The tale was absolutely thrilling and one can only imagine the amount of stress that Storm and his men must be going through to take on so many enemies so often. A second story called Frying Pan Seat also by Kanigher and Ross Andru tells the tale of a man named Mickey who lives to be outside in the fresh air. Once enlisted though, Mickey goes through hell as he is trapped inside of a tank in Normandy, the stuffiness and sweat a torture unlike no other. As it is, the man is put through his paces and eventually gets a bit of the fresh air he has been missing. The action is thick and dangerous but Mickey would not have it any other way as long as he can be in the open air, enemy bullets and shells be damned. Two great stories in one very excellent book make for one of the best issues in the series yet.