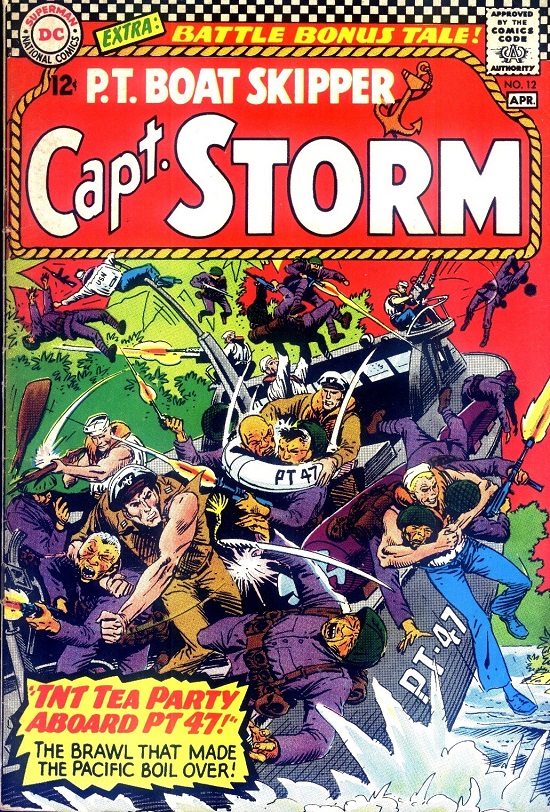 In the first of two stories, Ross Andru joins Robert Kanigher for the latest outing of Capt. Storm and it is an adventure like none he has experienced thus far. After having come back from a successful mission, he is looking for a little rest and relaxation and for a moment, he gets it until he is ordered to ship back out on what should be the easiest of missions – escorting a group of actors on his PT as they film a short detailing what it is like on such a boat. Storm wants nothing to do with it as any number of problems could arise from doing such a thing and even worse and much to his girlfriend’s ire, he might even have to do a bit of a love scene with the lead actress. So it is that things go exactly as he thought they would and they meet the enemy upon the high seas and to make matters worse, somehow, someway, his crew is knocked out of commission. What makes things even more interesting is where Kanigher takes it next as it finds the actors taking the place of the crew and even more surprising is that they turn out to be quite competent. Storm cannot believe it and yet he must put his trust in them if they are to have any chance at all of surviving the day. Unlike most of the previous tales, Kanigher would add just a bit of comedy to the proceedings, bringing a smile to the reader’s face at the expense of Storm and it would make for a nice change amongst all the seriousness that war tends to bring. Bob Haney and Gerry Grandenetti fill up the rest of the book with a story entitled Front Seat, a short tale that finds a reporter looking for his own story but one he wants to document from the first-hand experiences of the men on the frontline. It finds him questioning one man who then leads him to another and then another and another until he finally gets the entire picture the way he was looking to get it. It is a grim picture, the horrors of war, painted through their eyes and for readers back home, it is what they need to read in order to understand what is going on. Once again, the book features two very different stories and it makes for a great read, yet another solid issue in a title full of them.