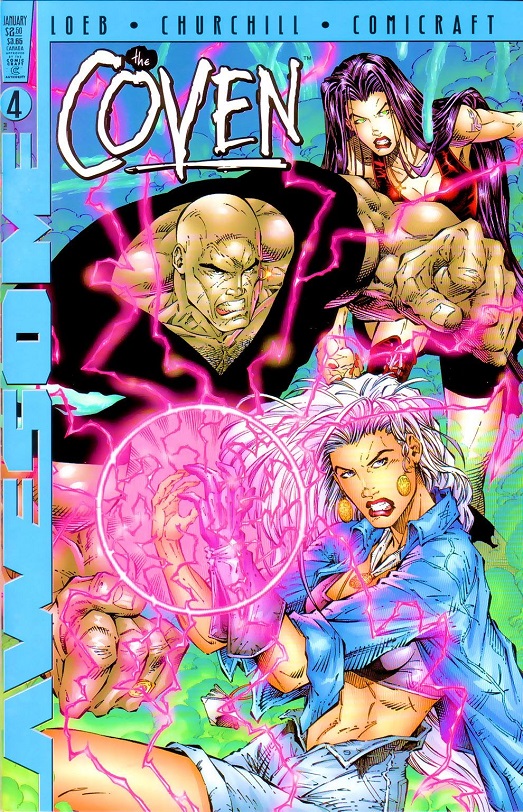 After three issues of what can only be called a strange affair what with the bad guys doing all the doing and the good guys standing around and chitchatting, at least for the most part, it all finally leads to a confrontation between the two groups. The Pentad has racked up all five mystical items they need – items that once were touched by the Son of God and they intend to use them to remake the world, remake it in the image of Cain, slayer of Abel. Blackmass and those that follow him refuse to let that happen and stuck in the middle is Phenomena, the latest recruit who has been listening to the propaganda of Grimoire for the last little while and she has no idea what to think. A battle breaks out of course but it is one-sided as the Pentad has been ready for the Coven and they soon find themselves prisoner. Soon, it is only with the help of Christina Baker, now Phenomena, that those on the side of good are able to do what is needed and Blackmass and the team take it to Grimoire and his men, thwarting them before Cain can be fully resurrected. Events in this issue fly by, the pace of it all moving at a very brisk pace which is not a bad thing. The same problems exist though, the feeling as if bits of the story are missing though some questions are answered as to just how Blackmass and Grimoire are related to Cain and Abel, what the objects are for and the understanding of why Blackmass is trying to stop the Pentad. Writer Jeph Loeb does a fair job at scripting it all but as far as world-building, there still needs to be more and the dynamic between the team members, their reason for being there is still something that needs to be explored. As always, the artwork looks great and the colours are extremely bright and bold and it is good to see a bit of action take place within the pages of the book but overall, while still more enjoyable than what has taken place in the previous issues, was still lacking on more than lone level. All the right ingredients are present, there simply needs to be more substance so readers can really dig their teeth in.