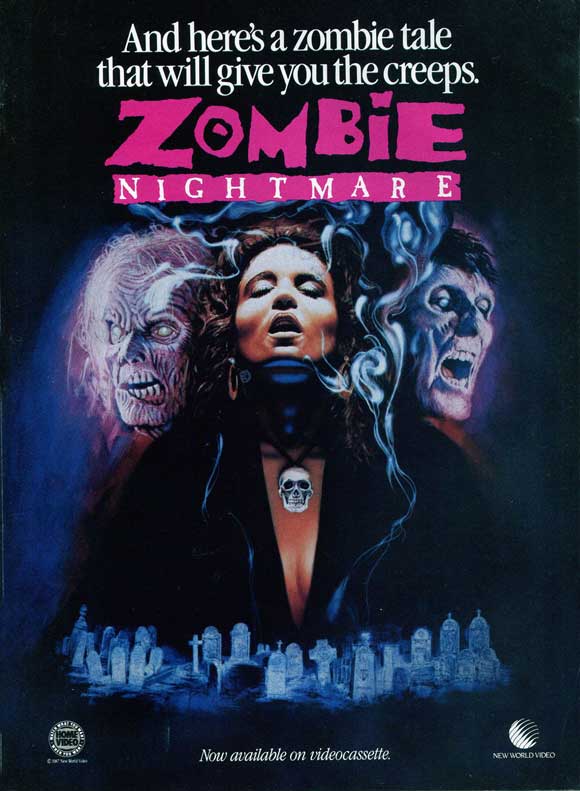 A young boy’s father is killed and years later, he too is killed. His mother, grief-stricken, goes to the local voodoo lady whom her husband died saving many years previously so that she might save her son. That does not happen but what the voodoo lady can do, is raise her son up from the grave so that

he might exact his vengeance and that is exactly what happens as those responsible are taken out one by one in the most brutal of fashions.

Overall, Zombie Nightmare is a fun little film, so bad that it happens to be good as they say. There is nothing groundbreaking about it but it manages to rope in Adam West to star in a supporting role and it features a soundtrack that one cannot help but love featuring the likes of Motörhead and Girlschool to name but two of the artists upon it. Spotlighting a story about revenge helps as well, not to mention having a zombie getting such revenge with the special effects not being all that terrible either, though

given that it was probably a small budget, one has to give them credit, at least when it comes specifically to the makeup, it looked decent as the zombie went about his business. Director Jack Bravman sets a good pace and the film never lags or lacks for excitement, the audience hooked along the way from beginning to end despite some of the cheesiness that managed to accompany the proceedings.

Cheesy might be putting it lightly as well as some of the performances bordered on the ridiculous, the villains of the piece sometimes overacting in the extreme with some very over-the-top portrayals. Some of those who star within might not be the most talented of actors but there are films that are far, far worse featuring people with far less capability. There are many that think this movie as a whole is quite bad but when one takes away that bad, one can see that the filmmakers were trying and there is enough here to like if one simply gives it a shot. Zombie Nightmare is not a great film by any stretch of the imagination but one can enjoy it all the same.