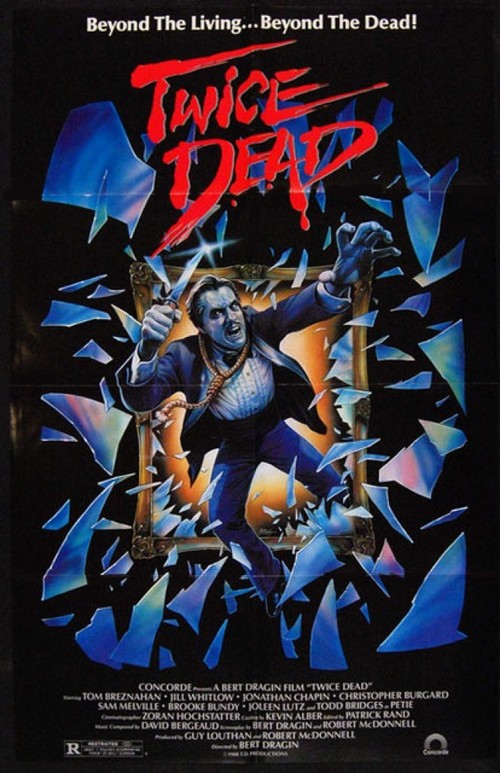 With murder, ghosts and a bunch of street toughs, Twice Dead has all the ingredients to make for a good 80s horror flick and it turns out to be fairly entertaining. Starring Tom Bresnahan and Jill Whitlow as brother and sister, they move into their new house and find out that living there is going to be a challenge for

a number of reasons, both among the living and the dead.

While it might seem like there is a lot going on, the movie plays it all out in measured time, beginning with a flash to the past where a deranged actor ends up killing himself. Cut to the present where a family who is hard-up financially end up moving into the very same house where said actor offed himself, though first having to deal with some punks who use the place to hang out. As things progress, Scott is finding all sorts of weird things in the house while having to deal with school and Robin, who is quite close to her brother, does the same. All the while this is going on, the local gang is looking for a little revenge on the family who displaced them and who soon discover that enacting that revenge is going to be harder than they

Director Bert L. Dragin who also had a hand in writing the screenplay does a decent job with the material and one can easily say that this is not high art nor should anyone believe it to be going in. That which the audience is to be scared of, or at least what Dragin wants them to be scared of – namely a murderous ghost who loves the ladies, is not frightening in the slightest or even executed all that well and falling flat for the most part. There were a couple of good special effects that at the very least do not make it a complete waste of time but given a bigger budget, Dragin could have done a lot more with what he was trying to get across, paranormal or otherwise. That being said, he also injects a bit of humour and there were a few moments where a smile would make its way to the viewer’s face.

When it came to Tom Bresnahan and Whitlow, as well as the rest of the cast, they would do a decent job of it all and make the best of it but at the end of the day, Twice Dead is a highly forgettable movie and not worth the time to find it but should it come on in the middle of the night while channel surfing, it will end up providing a bit of fun as there is just enough here to entertain.