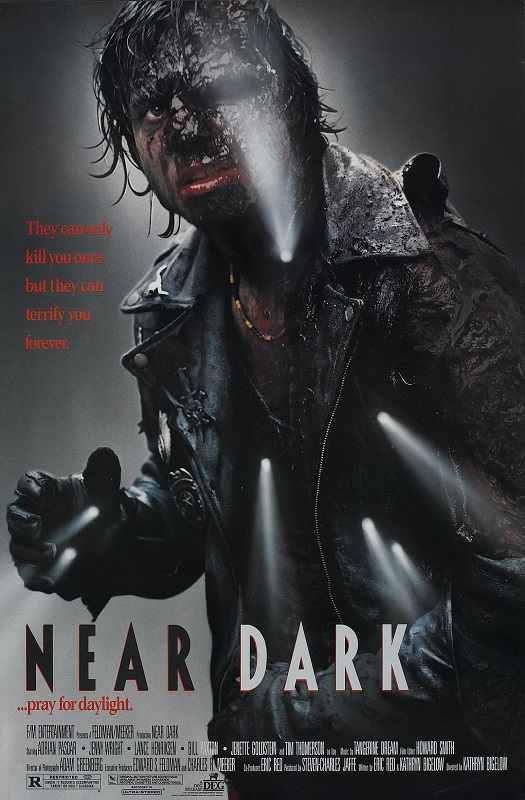 When it comes to the subject of vampires in film, Near Dark is a great example of both the subject being done right and the movie doing something different with it. By 1987 when this movie was released, something was needed to inject the genre with a little fresh blood so to speak and director

Kathryn Bigelow seemed to have the answer which was looking towards another genre, that of the western, and merging the two into what was realised here.

Starring Adrian Pasdar in the lead as a young man looking for a good time, he meets a young woman in Jenny Wright. There is something a little off with her and after a tumultuous night, Pasdar finds himself bitten and not feeling all too well. Soon he is mixed up with her family, or at least the people she now finds a home with, all of which are just as strange and strangely violent as well. It is not long before Pasdar discovers that they are vampires and he is becoming one as well, having to forsake his family and having to kill if he is to survive. As it is, the past refuses to let go and a battle will soon be

Bigelow paints a dark and atmospheric picture with this movie that delves into the corners of those who choose to go down this road. Nearly the entirety of the film takes place at night with few exceptions and that darkness is mirrored within the characters she peppers the movie with. It is dirty and violent and beautiful all at the same time, with there being very little actual bloodsucking aside from a couple of scenes, the bulk of the film chronicling the psychological warfare between Pasdar and those vampires who want to see him dead or fully turned to their side. Helping the movie achieve this in the most spectacular of ways was an incredible cast that would star within, the actors and actresses being just as integral as Bigelow’s direction or Adam Greenberg’s cinematography which

would help to bring all of this darkness to vivid life.

Starring Lance Henrikson as the big bad of it all and vampire daddy of the family, he would add an undercurrent of menace to the proceedings that would really make his performance stand out while Bill Paxton would ham it up as the violent and destructive Severen who could not wait to kill Pasdar the second he was able to. Rounding out the cast would be Jenette Goldstein, Joshua John Miller and the great Tim Thomerson as Pasdar’s father, a small role but a good one. Altogether, this was a strong group of players that would bring a lot to the table and they would do the material justice, lifting it up with their talent to make for an unforgettable ride.

After Near Dark’s release, there have been other films over the years that have tried to copy its formula for success, all to varying degrees with some of them being quite good like The Forsaken but none quite topping this one, the first in a new wave of vampire horror.