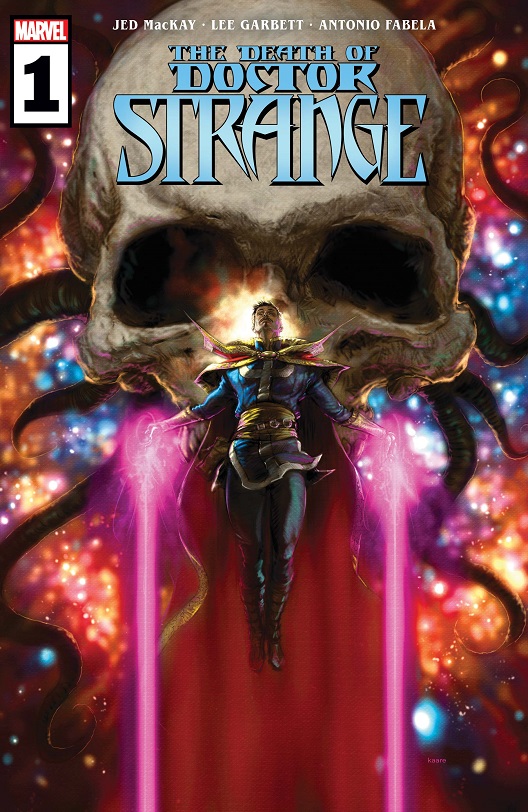 The Story – Stephen is having a good day. Until he dies that is.

The Take – The first issue in a new series has to grab the reader otherwise there is no point in getting the rest of them, so it is a good thing that Jed MacKay and Lee Garbett do a great job with this one. Called The Death of Doctor Strange, it should not be a spoiler saying that the man does indeed die and yet, given the ending that it is left on, one has to wonder just what it is that is going on and that maybe, the good Doctor shows signs of life despite fading from the mortal coil. The bulk of the issue is like a day in the life of Doctor Strange. He wakes up, has his coffee, takes Batts for ‘walkies’, heads to work and does a little surgery, helps a guy out of his magical predicament and so forth. There is humour and self-reflection and all around, the book is an excellent read. At first, one has to wonder just where it is all going, aside from the obvious it is and soon enough, MacKay reveals just that though what it means has to wait for the next issue. What should make things interesting is the arrival of Baron Mordo. What he wants is obvious though how he intended on claiming it is unknown and there is a confrontation that is sure to happen, though it will not be against Wong but Strange himself, though which version of Strange is yet another mystery to yet be revealed. One also has to wonder if Clea will factor into all of this as MacKay and Garbett pepper her throughout the book and one has to assume that she will indeed otherwise, why factor her in so prominently. As for the book itself, it looks great, Garbett doing a truly fantastic job with his pencils and Antonio Sabela making it pop with some great colours. All in all, this first issue made for a great package and where it all leads might be a mystery as of yet but it should make for a fun time if this issue is anything to go by.