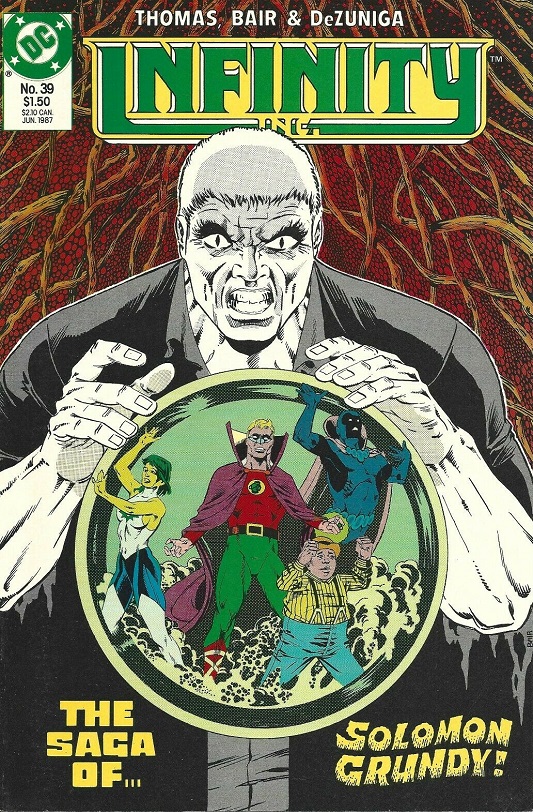 As it turns out, Solomon Grundy actually was born on a Monday or at least so far as Grundy knows. In this issue, the book exclusively looks at Solomon Grundy, Jade’s protector of late as she freed him from the ice, the only person to actually come back for him and thus making him loyal as nobody else had ever done as such. With a little free time on his hands, Grundy thinks back over his life leading readers to an origin issue that turns out to be extremely thorough and quite a bit of fun. If there is one slight downside to it all is that thoroughness makes it seem overlong, so much so that it does get a little tedious. No less enjoyable mind, it just seems to go on and on and as one is reading, wondering when it might end starts to enter the mind of the reader after fifteen pages or so. As it is, those who pick up this book will see Grundy come into contact with Green Lantern and perhaps due to the fact that Green Lantern was the first to oppose him, that is the reason Grundy hates him most. Soon Grundy will fight the Justice Society time and time again along with Green Lantern, be trapped upon the moon and in space and underground and each time, somehow managing to get himself free again to fight another day. The more interesting part of it all are not those battles nor of that which he did upon the earth but the story of his creation in the swamp. Once upon a time, Grundy was a man who went by another name and he was murdered, thrown into the swamp so that none might find him and there he lay for many decades. Over time though, as the flesh off his bones rotted away until there was nothing left, wood and other bits of plant life would adhere to them and soon enough, a golem-like creature would be created from the swamp, a monster of a being that would rise up and look at the world through different eyes, eyes filled with anger and such would be the course of this creature’s life as long as he walked the Earth. Altogether, a great issue with only a minor fault that works against it but one that can be overlooked due to the entertainment found within.