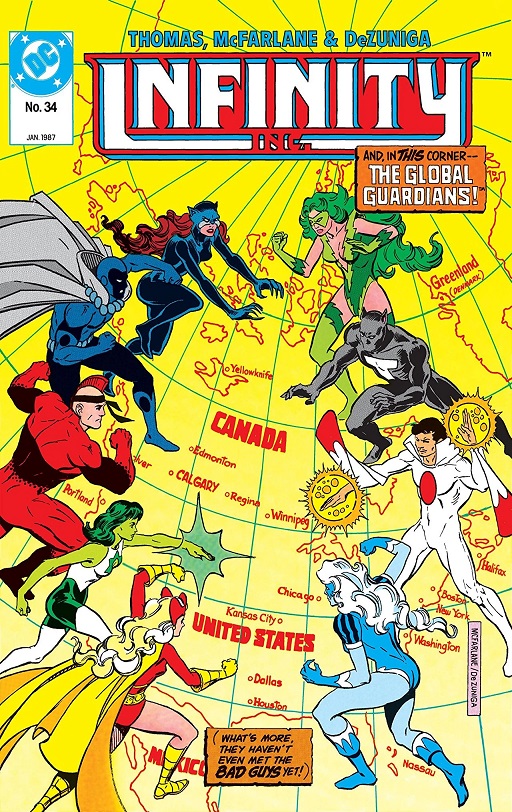 The book begins with Norda heading over to Hawkman’s old mansion, currently belonging to his son Hector now and he discovers carnage within and amidst it all, Hector and a strange woman. It becomes apparent to Norda that the woman is controlling his friend and that things are not all right. Leaving for Feithera, he means to find a way to save his friend and get to the bottom of just what is going on. Roy and Dann Thomas then take readers back to the rest of the Infinitors who are at a business conference involving various entrepreneurs and the like from across the world, there to provide a bit of security along with the Global Guardians. While the book would begin with a bit of darkness and mystery, the second act would slow that pace right down as Thomas and company would once again go into the origins of Infinity Inc., a good thing for new readers but something that has been done many a time at this point. A little more interesting would be the origin story of the Global Guardians, and even further back with the Club of Heroes, and some of their members who seem to be a lot of fun, if not completely original in powers and design. The two teams end up mingling and competing and having fun at each other’s expense but most importantly, they end up working together as both are there for the same reason and that comes into play when Injustice Unlimited show up to cause both a little havoc and commit a bit of crime. Thankfully, the third act picks the pace back up and ends with quite a bit of action between all the players who are present and the villains prove to be a match for the combined might of the Infinitors and the Guardians until finally, it comes down to a standoff when the bad guys produce a hostage in Hourman and a ransom is set, the teams unable to do anything at this point. There was a lot going on in this issue and for one worried about the book being worth one’s money, there was definitely nothing to be worried about as it was packed from cover to cover with all manner of things going on. It might have gotten a little slow at one point but it was redeemed in the end and turned out to be a bit of fun.