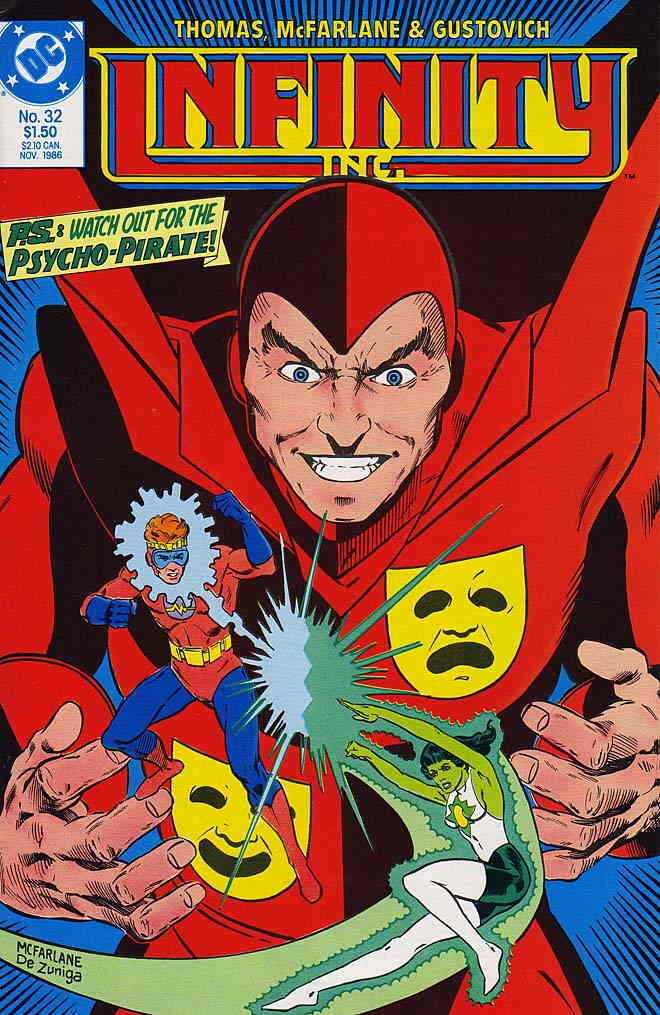 The book opens with Psycho-Pirate busting in on Jade and Brainwave and while they do their best to go on the offensive, it is not long before he has them fighting each other thanks to his powers. The book then cuts to various scenes throughout, one of them being Skyman who is in search of Jonni Thunder once again while the Global Guardians are doing a bit of complaining. Elsewhere, author Roy Thomas has Doctor Mid-Nite looking at Hourman to see if the man can become the hero he wants to be and then moving on to her next patient which is Mr. Bones but not before Hourman gives her a quick kiss. In a big reveal during a very small panel, Fury finds out she is pregnant, Norda heads home and Wildcat is getting in a workout. The battle between Jade and Brainwave has continued throughout all of this and it comes to a conclusion as Psycho-Pirate takes off, having lost his powers and the two Infinitors coming to their senses which leads to the big bad who sent Pirate in the first place, the Thunderbolt who wants Jonni Thunder. Having lost his powers or not, the book closes out with Psycho-Pirate reuniting with his Medusa Mask which should make things very interesting for the Infinitors going forward. Altogether, this was an issue that was just okay. It featured some good parts and some that just seemed like filler, something to pad the book with as there is not a whole lot going on. Seeing the mystery of Hector Hall explored a little more would have been far more preferable than most of the asides in this book, especially as the team knows that there is something strange going on with him and it would have tied in perfectly with the pregnancy revelation. Be that as it may, the book entertained more than it did not and Todd McFarlane’s linework continues to get better with every passing issue making the title a pretty decent read.