A group of men get out of prison in 1935 with one man receiving a check for twenty-five thousand dollars due to forty years of saving. They head out of town on a train thanks to some state-bought tickets and along the way, they realize that the check is only redeemable at the bank of issuance. Knowing that they have to head back, they soon come into the knowledge that they are also heading straight into a trap by their old prison captain who aims to get

that money over their dead bodies. Suffice it to say, they do not want to die and are going to do their very best to both get the money and stay alive.

Fool’s Parade is an interesting film more for its cast than its subject matter, starring James Stewart, George Kennedy, Kurt Russell, Strother Martin and an older and unrecognizable Anne Baxter who would play an ageing madam. Seeing a young Russell among these stalwarts of the big screen was a little strange at first but he would fit right in with a good performance of his own, perhaps the young actor gaining a few tips from 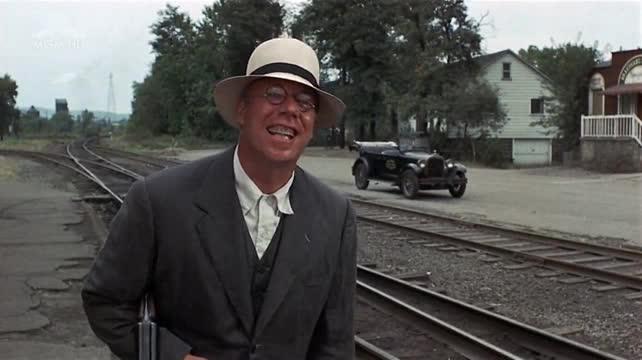 those who surrounded him. Jimmy Stewart was as good as ever, the man playing a former killer and the man whose money was on the line as well as sporting a glass eye which looked quite out of place, as it was probably meant to. If there is one thing that viewers can appreciate and count on, it is a solid performance from Stewart as he always made every character he ever played completely believable. Opposite him would be Kennedy as the villain, the man hamming it up perfectly as the killer and semi-religious nutjob who hates ‘boys’ and has no problem ridding the world of them.

While the performances would keep the picture aloft, Stewart’s in particular, the story and script would do a fair job of it too, providing the cast a solid picture that would float between the dramatic and a bit of light-hearted comedy. Most of it would encapsulate the former while the latter would be sprinkled throughout, almost seeming out of place given the fact that the men would be running for their lives throughout the entirety of the movie. Made in 1971, the production values reflect the time and it was good to see Stewart in a film without that classic tint that so many older movies have, almost as if the man could step right out of the picture to stand in front of the audience live in person.

Though there were no real faults and it was all wrapped up in a happy ending, the entire affair was simply okay and nothing really exceptional. If one were to watch the movie in the afternoon, there is a good chance they would not remember it by the time it got dark outside, all of it being a little forgettable. It was not a bad film, not by any stretch but with a cast such as this, it would have been nice to see them in something a little more appropriate given their talent and more importantly, memorable.