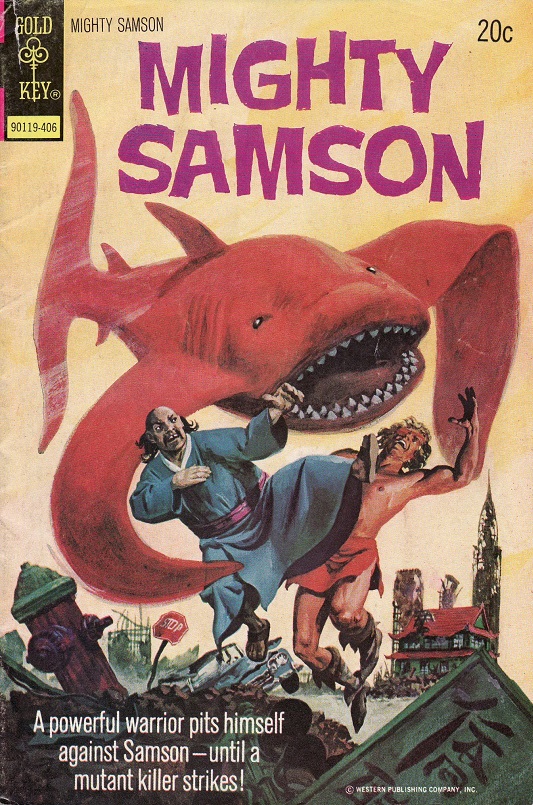 Samson, Sharmaine and Mindor are exploring a part of the city they have never been to before, a place called C’Nal and it is there that they discover a place that used to teach Martial Arts. Within they find books and weapons which they mean to take when they are suddenly confronted by a man named Chang who commands them to stop in the name of his Manchu. While the others escape, Samson and Chang begin to fight but are soon interrupted by a flying shark which they team up to defeat before continuing their own battle. It is not long before Samson finds himself locked up, tricked by Chang and soon after that when he is brought before the Manchu who turns out to be Terra of Jerz. José Delbo and a writer lost to time tell a fun story that sees Samson and his arch-nemesis meet up once again and it finds Terra doing what she always does – seeking power at any cost. The one thing going for Samson at the moment are his smarts and he knows Terra better than most and so he promises her the one thing that he has always refused her, that being love but only should Chang defeat him in battle. Samson also realizes that Chang is an honourable man and should Samson defeat him, then Terra will be on the outs and his friends will be set free. Suffice it to say, the writer does not throw in any further surprises and things essentially go to plan just as Samson had wanted. What is a little sad is the fact that Terra seems more upset over the fact that she has ended up alone without Samson by her side rather than the loss of power. She is a lonely woman and in Samson, she sees someone equal to herself even though Samson does not see it as such, his heart belonging to Sharmaine though he has never expressly said or shown as such. One can definitely say that this will not be the last time that Terra will make an appearance in this book, the Queen of Jerz always coming up with some scheme that will give her the gratification that she covets and more importantly, filling that hole in her life, at least in part if possible. A fun tale with some great artwork from Delbo makes for standard fare in this book but good stuff all around.