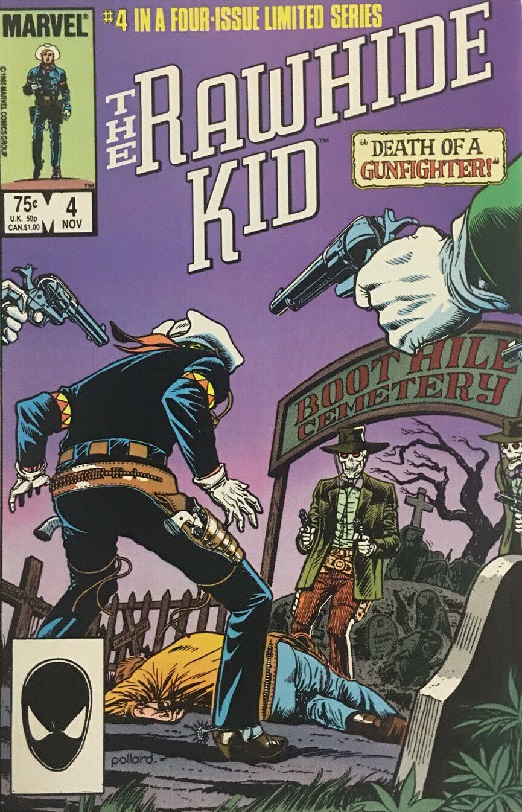 The final issue of Johnny Bart’s second series, that of the Rawhide Kid’s finds him dreaming a vision of death and it has him a little shook. After he awakens, he and Understudy talk it over, the latter brushing it off and yet when they make it to the next town, that dream comes screaming back as it looks to be coming true. Bill Mantlo and Herb Trimpe send the Rawhide Kid off into the sunset in a book packed with living nightmares, guns a-blazing and a ton of action as Bart faces not only his own mortality but that of the young man he has been training. It is in many aspects, a sad issue for Understudy is killed by the Pinkertons, Packard finally ready to face down his demons, taking his fate into his own hands. He might be ready and he may very well not be but he cannot keep running and he cannot rely on Bart to save him anymore. There is a lot going on in this issue and Mantlo tells a deft tale, one that finds a man coming into his own despite his death and another accepting the fact that time marches on and he is who he is and accepting himself as he is will be the only way he can move forward. There are not too many tales such as this one that finds, especially at the time of its original release in 1985, heroes in the twilight of their years and its creators in Mantlo and Trimpe have done a great job at bringing it to life, giving readers a truly moving tale of the Rawhide Kid that goes into his past, his life and what motivates him as a whole. Best of all perhaps, was the final scene of the entire book, ending it as it should with the Rawhide Kid, legend and all, riding into the sunset. It might have been cliched and it might have been seen a million times before in many a film but given how everything played out, how else does one send a hero off? A great little miniseries that gives one of Marvel’s legendary western heroes a perfect sendoff from two of the best in the biz.