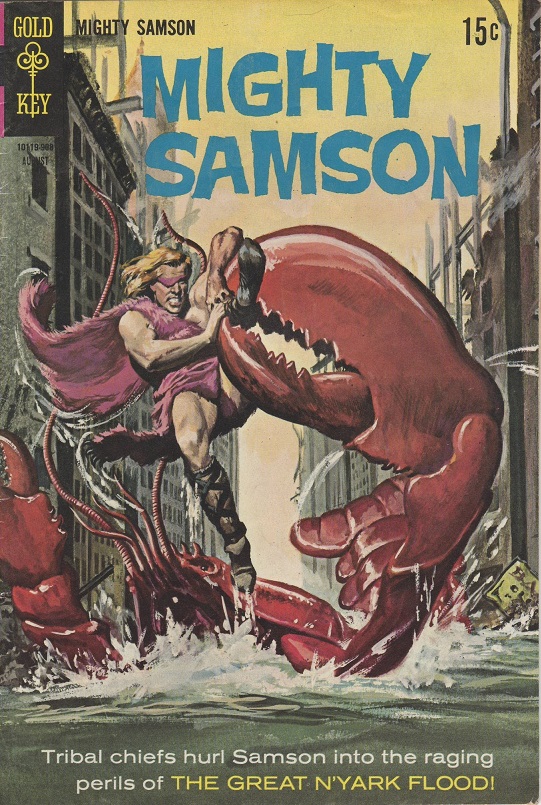 A torrential downpour that has lasted far longer than it was welcomed has flooded the streets of N’Yark and if it had simply been what most people considered a flood, it would have been fine but the waters that flow through the streets are biblical in height and thus many are finding it hard to survive. Samson at the moment has been separated from Mindor and Sharmaine and is eager to get back to his friends but he cannot ignore the cries for help that surround him and being the hero that he is, he stops to help each and every person he sees. Things are not made any easier by the various creatures that both inhabit the waters that now surround him nor those looking to escape them or take advantage of them and so Samson works non-stop to do what he must in order that those he calls neighbour make it out alive. As for Mindor and Sharmaine, they await their friend and yet one can only do so much waiting without food and supplies and so they set off on their own to the very same that Samson is doing and as the book progresses, they end up passing each other by on more than one occasion. Once again, Samson and company fave a natural disaster, yet unlike those previous stories, Otto Binder makes this event the deadliest one to appear thus far in the title and as such, it ends up being quite enjoyable as a result. As it moves along, the tale finds Samson facing off against so many monsters, one has to wonder if he will make it out alive and yet how could one doubt the strength he bares? Soon, much like Noah from the myth about the flood, Samson has built himself an ark, brought aboard every person he can who needed help and even then, they end up betraying him when they see a bit of land where Terra of Jerz just so happens to reside, land that is above the floodwaters. Eventually, after some more confrontations, things eventually work out and Samson is reunited with his friends but the waters are not going anywhere and if there is one thing that this book does not tend to do, it is carry on storylines past a single issue and yet, this one does just that. While Mighty Samson is enjoyable as a whole, with any given book providing a good dose of adventure, this one ends up being one of the better issues to come along as it gives the reader a lot to marvel at.