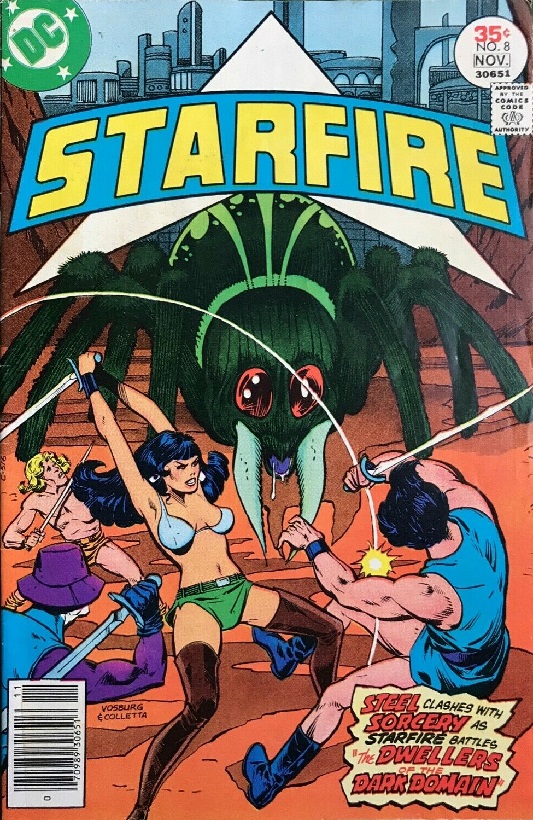 With this final issue, though they knew it not at the time, Tom DeFalco takes over scripting duties and once again, much like his predecessor, continues on without missing a beat as Starfire and the men that follow her meet up with the last of the Lightning Lords. Reluctantly, after a bit of conversation, they agree to follow Starfire in her quest to overthrow the rule of the Mygorg and the Yorg but it is not simply who they follow that is on the table for discussion. What Starfire’s people need is a homeland, a place where they might rest and recuperate and more pointedly, live and when Starfire looks over them, she realizes that there is a truth in what she is told. DeFalco does a great job in the writing of this tale, understanding the character of Starfire and the tone of the book quite well. All of it reads as authentic as the previous seven issues which is a good thing and it makes it all the sadder that it happens to be the last one that would ever be produced. Be that as it may, it is not written as such and DeFalco, Mike Vosburg and Vince Colletta take Starfire in search of this homeland and deep underground when she notices a dead man outside a cave, a man who looked very much like he who rescued and loved her early on in the series. Deep underground, she and a few of her men come across a kingdom called the Dark Domain, a place of evil men who would sooner kill all of them than giving them a chance to talk. Fighting ensues as well as a defeat where Starfire meets the lord of the place and after refusing to be his concubine, she breaks free where more battle takes place, against him and the giant spider that is about to devour Thump and the others. All of it comes to a spectacular end with Starfire and her men escaping successfully, all of them full of hope that their quest to find a home and defeat their enemies will be nothing but fruitful. So while the book might end on that hopeful note, for readers the hope of seeing Starfire again would be dashed for she would never make another appearance again. A great series for what it was and for how long it lasted, one that deserved to continue perhaps more than any other due to the sheer entertainment that was contained within its pages.