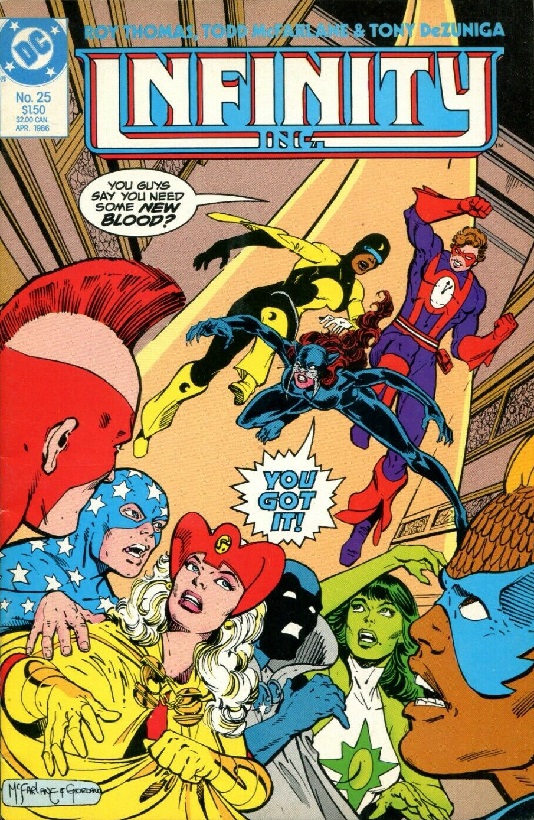 The Infinitors have all gathered for a meeting, a number of topics on the docket needing to be discussed like their first paycheck, which is quite small, and the inclusion of new members. The Justice Society arrives just then and they vote to welcome the members of Infinity Inc. to the team, which surprisingly, they all refuse. It is then that the new recruits are brought out, that being the new Hourman, Wildcat and Dr. Midnight. The members of the JSA who just so happen to bear the same names as the youngsters before them are somewhat surprised and yet they end up giving them their blessings, realizing that they have been around for quite some time as a team and at some point, they will have to step aside. Roy Thomas does a great job with the interactions between the two teams, the elder statesmen of superheroes being just that and effectively passing the torch without expressly saying so while the Infinitors are finally comfortable at being a team, united more now than ever. Having just come out of the Crisis that wiped out certain portions of their history as well as some loved ones, there is some reflection that takes place and it is understandable that they do so but it does not last for long as a new emergency calls them forth, this one involving giant sharks. It is about midway through the book before the pace finally picks up and it is good to see that is not the villain of the week whom they do battle with but with something that gives them a bit of pause. Sharks are one thing, giant sharks are another and the viciousness that they attack with is truly spectacular to see. Todd McFarlane does a good job of making this book be the spectacle that it should and really brings forth the desperation and horror in a scene involving Wildcat who has to claw her way out from within a shark itself, killing it in the process as she fights to live and breath. There is a cliff-hanger of course as a new villain who looks to be behind these attacks is introduced and it also leaves off with a caption stating the return of the world’s worst supervillain team – Helix. Overall, this was one of the best issues to come along in this series in a long time, making readers want to see just where it is the team goes from here.