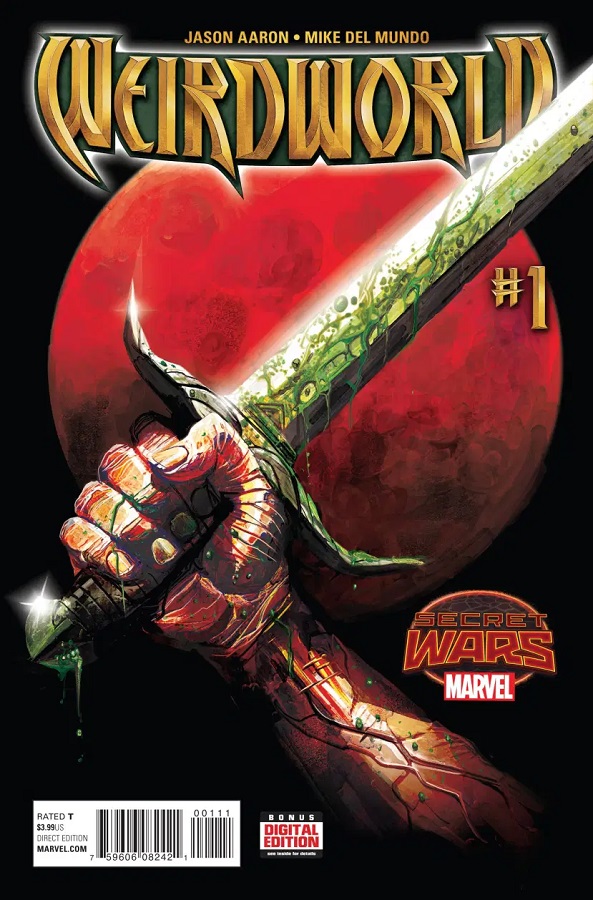 Arkon is having a bad day. It is probably the worst day of his life and it just keeps getting worse. Polemachus is gone and Arkon finds himself in a strange land where things do not make sense and everything is unfamiliar. He does not know what to do and just when he is about to give up, that sweet sound of battle rings and his spirits are lightened. Battle is not only what he lives for, it is where he lives. Jason Aaron resurrects Arkon for a new generation as part of Marvel’s Secret Wars event and it finds the former leader of men all alone, looking for purpose and searching for his homeland, Polemachus. The book is brought to vivid life by Mike Del Mundo, most recently having drawn the excellent Elektra series which came to a premature end and he really outdoes himself with the visuals. This first issue is truly breathtaking as Del Mundo brings to life all of these alien-looking vistas, the ogres and the creatures that inhabit it, not to mention Arkon and the surprise villainess at the end of the book. This is definitely not the Weirdworld of old and while that one was pretty good, this one seems to have some real potential and might just be better. The characterization for Arkon is perfect as Aaron really nails down that feeling of loss and loneliness, tinged with a bit of crazy. Now that we have already seen Arkon in battle with his ask-questions-later attitude, it remains to be seen if he will gain any friends or allies as the title goes forward. For now, he has definitely made some enemies and they are none too happy with his actions. Along with Ghost Racers, Weirdworld is taking Marvel comics and their Secret Wars event into some strange yet amazing territory and it could not be any better or any more fun with Aaron and Del Mundo at the helm. It shows that fantasy has a home in the Marvel Universe even if it is not quite as popular as it may have once been and yet with Game of Thrones and more delivering of late, perhaps Weirdworld is something that can stick around in one form or another.