1974 would see the release of the last Amicus horror anthology entitled From Beyond the Grave, one which would feature an all-star cast once again with

some truly eerie stories all centred around an antique shop run by Peter Cushing, antiques that would come with more than just their age.

The first tale involves a mirror, bought at the aforementioned antique shop for a bargain, David Warner’s character Edward believing he scammed Cushing out of it. Getting it home, he soon has a party and holds a seance where they summon forth the image of a horrific man who resides within the mirror. It is not long before the man is having Edward kill for him, sacrificing young women so that he might walk the Earth once more, all the while driving Edward insane. It ends not as Edward would have thought. A second story involves Ian Bannen, Donald Pleasence and his daughter Emily Pleasence, the latter two seeming like an

ordinary, working-class family while the former is a man who cannot stand the life he currently has. Bad things happen to Bannen’s character after he steals a service medal from the antique shop, claiming to be what he is not and fate soon catches up to him. Ian Carmichael switches the tags on two antique snuff boxes, believing he has fooled Cushing and then bargains him down further and what he soon realizes is that he has bargained for more than he thought when an evil spirit attaches itself to him and assaults his wife. In a final segment, Ian Ogilvy buys an ornate door from Cushing and like many of the previous customers, bargains him down. Once it is installed in his house, he soon finds that it leads to a strange blue room, one that 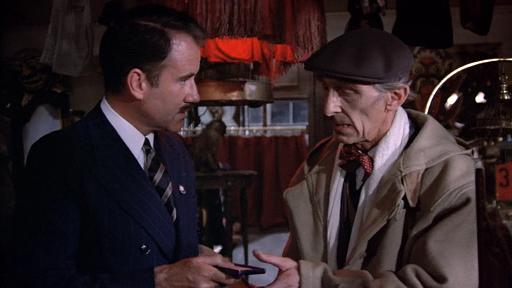 contains a monstrosity that needs blood for both the room and itself to survive.

Each of the stories presented within would captivate, each one different from the last and all of them quite good. The first and the last were creepier and far more horrific than the two they bookended and yet, something has to be said at just how effective the performance of Angela Pleasence was, the woman exceedingly disturbing. If there is one thing people will take away from this movie, it is the haunting portrayal she gives, seeing the insanity that lies behind her eyes which is truly frightening. Warner is good no matter the role he takes on while Ogilvy would make the audience believe the fright his character experienced in the 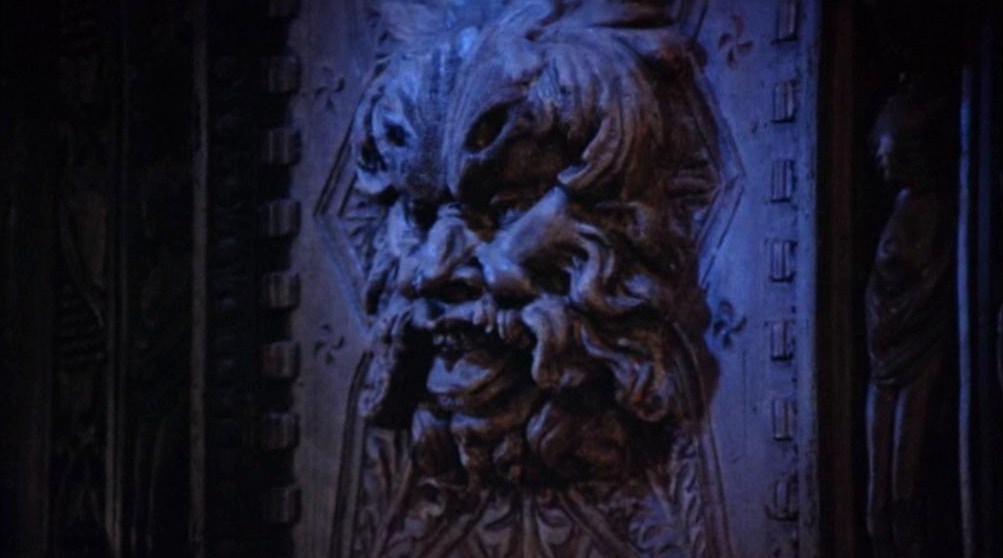 blue room, a sequence perfectly shot by director Kevin Connor. Despite Angela Pleasance who might haunt one’s dreams, it is that blue room and its resident that is the stuff of nightmares. Peppered throughout would be a bit of humour as dark as it was, most of it from Cushing’s performance as his character would give sly, knowing looks to those who would try to take advantage of him, the viewer immediately realizing that horror would soon follow.  Top to bottom, from the cast to the special effects, the movie had everything that one could want in a  picture such as this.

Most often, as far as horror anthologies go, they are often hit and miss but Amicus did them right and From Beyond the Grave is a perfect example of how to make a captivating film comprised of short stories. Casting Peter Cushing to star in the framing sequence and as the villain, at least of sorts, was a smart move as it would immediately lend the movie an air of credibility for those horror buffs headed to the theatre and when all was said and done, it would begin and end with the man as really, all good horror movies should.