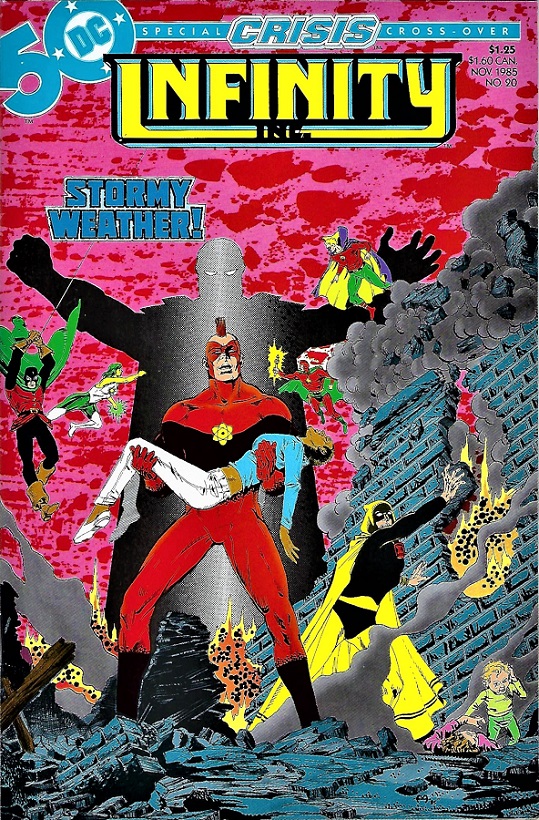 Crisis on Infinite Earths rolls on and it is causing a lot of trouble for the Infinitors in the form of natural disasters. A tornado is currently wreaking havoc and while Jade, Silver Scarab and Northwind are doing their best at keeping a building from falling over, it takes the intervention of Green Lantern and Starman to make their efforts successful and finally put a stop to the whirling menace. While all of this is going on, author Roy Thomas has Nuklon going through a few tests courtesy of Dr. Mid-Nite after which they head to lunch with Rex and Rick Tyler, the former known to readers as Hourman. As it is, disaster strikes the hospital as well and so Nuklon, Hourman and Dr. Mid-Nite spring into action in order that nobody there gets hurt which seems an impossible task but one they are willing to take. Despite being a somewhat grounded issue, there being no villains or otherworldly phenomena to deal with, this issue of Infinity Inc. still managed to be packed with action, not to mention its fair share of drama. Thomas puts the spotlight on Nuklon for a bit which is not something that has happened overly much in the past and it is nice to see a different member of the team focused upon rather than Scarab or Obsidian who have seemed to be featured more than most. Being a Crisis tie-in, it is also good to see that it has not overly affected what is going on, Thomas able to make it seem like a natural part of his story rather than something that was editorially mandated. Inserting the Justice Society members was a good move, making up for the missing team members who were taken away to play their part in the Crisis, secondly because they add not only knowledge and experience to the situations at hand, readers get to see how the two teams gel, them being so closely connected and all. The artwork was a step up in the right direction with the addition of Mike Hernandez, complimenting Thomas’s story well. All in all, there was some solid superhero action along with a bit of good characterization to make it all a better read than many of the previous issues.