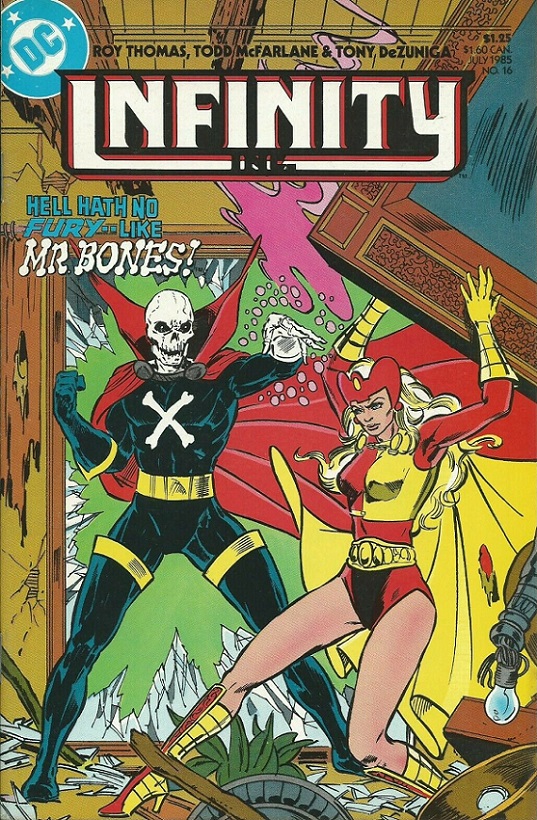 After dealing with the menace of Chroma, it is time for the members of Infinity Inc. to chill out for a while with a friendly game of volleyball at the beach which also turns out to be an engagement party for Hector and Lyta. Despite most having a good time, tensions are still running high, especially when it comes to Todd, more recognizably known as Obsidian. The events of the past while have taken their toll on him and he is having a little bit of a problem in letting go of those particular emotions. Roy Thomas keeps adding layers to the character which is a good thing and as he does so, he also takes a bit of time to explore the rest of the team as they proceed with their game. As the party wraps up and various heroes have stormed off, Lyta decides to get suited up and head out when she is attacked by a villain named Mr. Bones. Much like Kirby’s Demon, Mr. Bones talks in rhyme and he has come to kidnap Hector Hall for a big ransom payday. That plan goes out the window as Hector is obviously not there and so for the rest of the book, it is a battle between Mr. Bones and Lyta and while there is a good amount of back and forth for the remainder of the book, it is Mr. Bones who comes out on top. If there is one thing that Thomas is doing right with this title, it is expanding on the personal lives of these heroes and seeing just what it is that makes them tick. As such, it endears them to the reader as they seem more human than most superheroes which is a good thing. On the flip side, it would be nice to see a little more action though the influx of new villains is a bonus that keeps things interesting and prevents the title from getting stale. One has to wonder if the team will be able to get past the Chroma-event or not, if they will be able to function together as they have in the past and when it really counts or if this is just the beginning of the end. There are some unresolved issues and they do not seem to be going anywhere and while families are complicated, it is better to work things out than let them fester. A decent issue overall that looks to be heading in a promising direction.