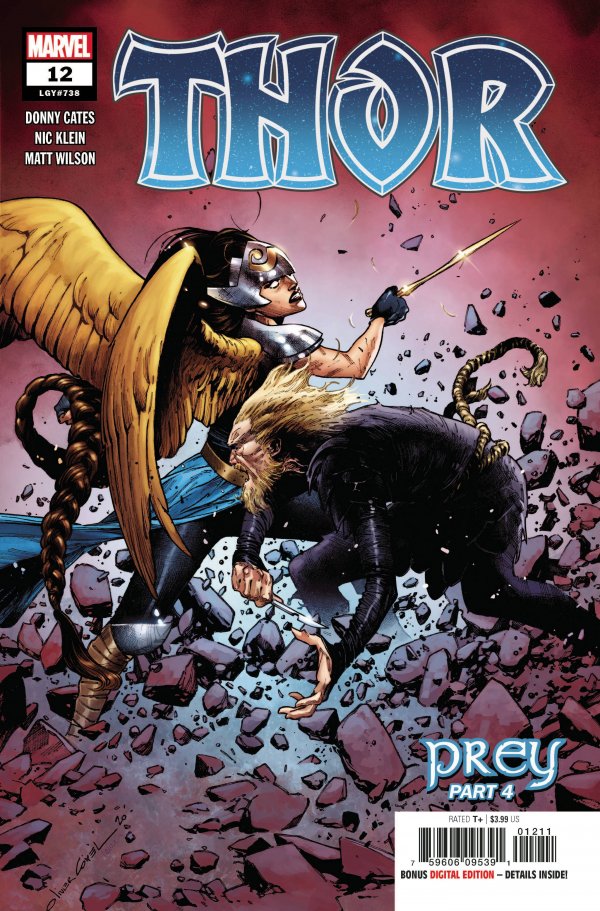 The Story – Donald Blake continues to seek out both power and revenge and he is succeeding at both.

The Take – In the fourth part of ‘Prey,’ author Donny Cates and artist Nic Klein continue to tell the tale of a Donald Blake gone mad and in this issue, he has set his sights upon Throg, that version of Thor who is miniature in scope and amphibian in nature. Throg is also a brave noble god and he will not go down without a fight and he does indeed give back and more to Blake what Blake gives to him. Thankfully Throg has a little help in the form of Lockjaw but when it is all said and done, Blake still manages to deliver Throg a defeat though thankfully, readers get to see him fight another day. Klein gives the book some real excitement with his pencils, the battle between good and evil as epic as it could be within the number of pages allotted to it, a fight that could easily have lasted twice as long between the two parties. Seeing Throg depicted as heroic and as mighty as he was would turn out to be an absolute thrill and pluck at the heartstrings to see the character given as much love as he was. One can easily tell that Cates has a fondness for the Thunder God and his history and it shows through the words put down upon the page and through Klein’s incredible delineations. It all comes to an end soon enough though as Blake, after defeating Throg, has taken on Doctor Strange and soundly smote the mage as well. In the process, as Strange tells it, Blake has discovered where the source of the power he seeks comes from and that source is none other than the World Tree. While Valkyrie sets out to find a bit of help in defeating Blake, readers are left to wonder just how much the World Tree has left in it after all the abuse it has suffered over the course of its recent history. Other questions such as the fate of Thor come to mind, one among many and yet knowing this creative team, they are sure to be answered soon enough and in glorious fashion.