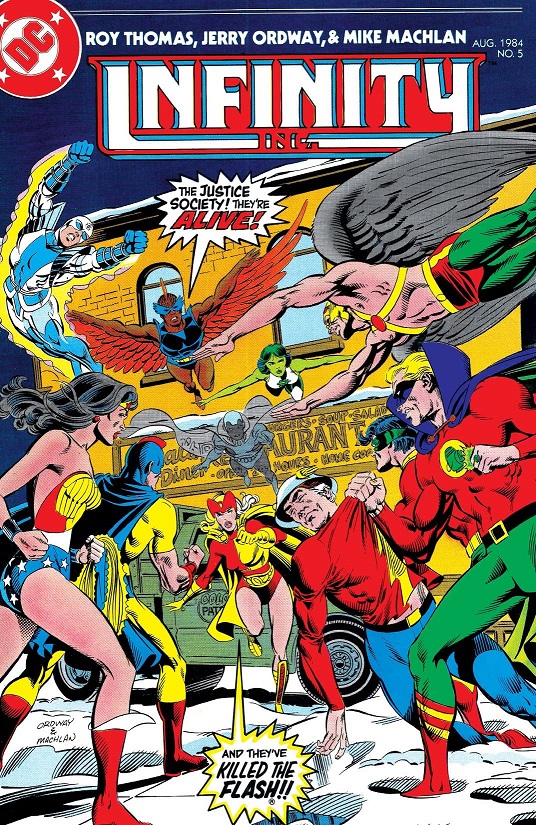 Part five of the Generations Saga finds the members of Infinity Inc. in a bad place as five members of the Justice Society have seemingly died and one of those is Wonder Woman, mother to Fury. Away from all, Fury acts much like her name and it is only with the persistence of the Silver Scarab whose own father – Hawkman – has died, that she is able to calm down, though the anger and rage still remain. The rest of the team, minus Obsidian and Jade who mourn at a local church for their father – the one and only Green Lantern, are currently dealing first with the police about unmasking the JSA and themselves in order to claim the bodies among other things and then the mayor. The mayor wants to start doing autopsies, something the team is unsure about and so a call home to Hawkwoman and Doctor Mid-Nite lets them know that under no circumstances can that be allowed to happen, mainly for the fact that those who are thought dead could still be alive. Not moments later the Flash arrives on the scene with a strange story of a deadly stream named the Koehaha – the Stream of Ruthlessness. Once thought destroyed by the JSA on a mission that would not be without casualties, he and the rest of the Justice Society believe that it was this stream that drowned their teammates and thus because of its unusual properties, it only mimics death in those who drown within it. As the Flash and Infinity Inc. race to the morgue to put a stop to the autopsies, they discover that the dead JSA members are already coming to and that the influence of the Stream of Ruthlessness has taken effect, turning them from friends into foes, their demeanour and actions that of a villain. That leads to a battle between them all with Roy Thomas and company leaving it on a cliff-hanger so readers have to come back and find out what happens next. Thomas and Jerry Ordway, the latter of which provides his most excellent skills in the pencilling department, provide an additional bit of story involving Brainwave Jr. and the Star-Spangled Kid, that too is left on a cliff-hanger with a confrontation that has been in the making since the first issue of the series. This was one of the better tales in the book as it continues to find its groove with more, hopefully, to follow.