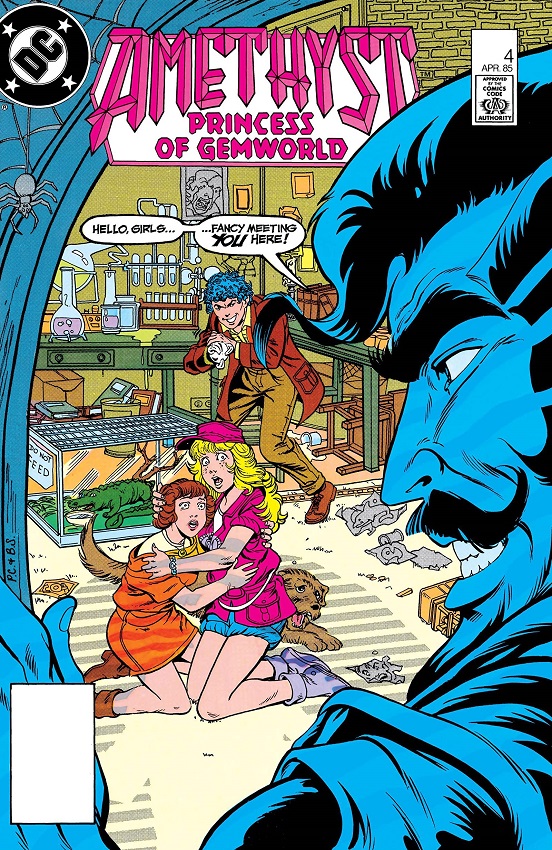 Back on Earth, Amy Winston finally awakens as the part of her that is Amethyst has finally returned to her body, only one night having passed since she fell into an enchanted sleep. Emerald is glad to see Amy and her parents are ecstatic that everything seems to be okay. All is not as well as it could be though as Citrina is still trying to summon her forth from Gemworld, the old woman still unconscious and most likely unaware of what she is doing. As such, Amy continues to feel quite sleepy, even passing out during her lunch where she momentarily returns to Castle Amethyst and where she catches a hooded stranger standing over the prone Citrina. While Amethyst manages to scare the guy away, she then fades back to Earth, not enjoying the fact that this could happen at any moment she closes her eyes. School also brings with it other troubles, like the fact that Carnelian is still hanging around as Carl and once home, Amy and Emerald discover that he has sent a creature to spy on them. This leads to a bit of adventure where they head next door to see what is going on and then a bit of a battle against the man they thought was Dark Opal originally and instead, turns out to be a robot who is going to throw them in a fiery pit underneath the house. Dan Mishkin and Gary Cohn write a very entertaining tale that sees the two girls get themselves into a bit of trouble and while there is little of Amethyst, it seems Amy can be just as fun to read about. The authors also give readers a glimpse of what is going on in Gemworld with some of the various players, specifically Lord Garnet and Sardonyx, the latter of which has found himself in a bit of a predicament, something which might spell trouble for Amethyst or those on the side of good. This issue also sees Kurt Schaffenberger take up the artistic duties and as such, the book looks great, the man proving he can do no wrong no matter the title he works on. All of it is left on a cliff-hanger and without any magic at her disposal, one has to wonder just how it is that Amy is going to get herself out of her deathly predicament.