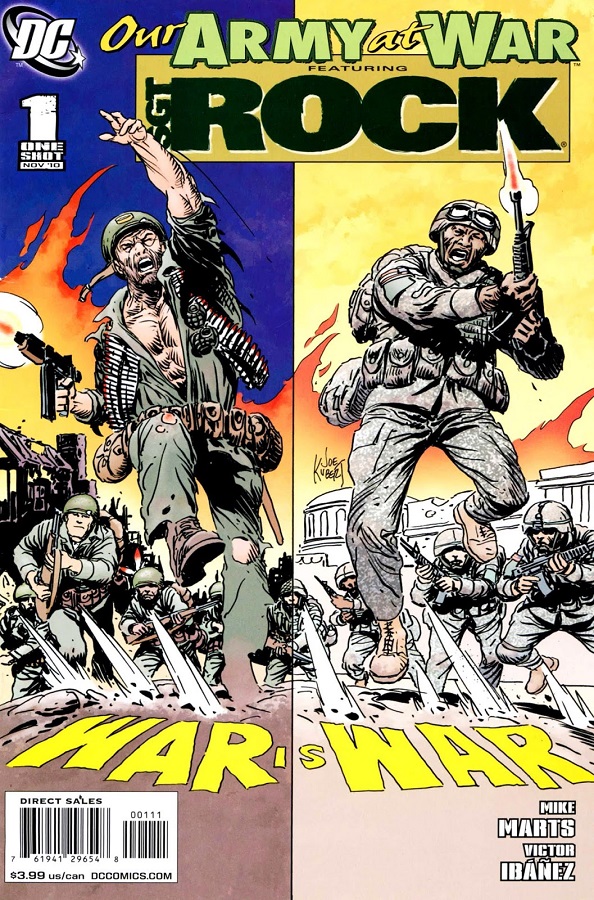 In a story entitled ‘Time Stands Still For No Man,’ Mike Marts and artist Víctor Ibáñez give readers a split-screen look at what is essentially one tale told through two time periods though they are in fact different. One concerns Corporal Anthony Sigliano during the Second World War and the other Master Sergeant Keyon Jaspers who is in Iraq after 9/11. Each plays out in a similar fashion, the script from Marts flowing effortlessly between each period as the two soldiers end up facing a battle in front of them, one where they are sent reinforcements as the situation is simply too much for them to take on alone. In the past, it is Sgt. Rock and Easy Company and in the present, it is Captain Duncan and his Gods of War – two teams of highly respected specialists that have been through hell on numerous occasions and who can be counted on to bring that mission home successfully. The book would open with tragedy, a portrait of the 9/11 disaster that took place, an event that would play into the story that would not be revealed until its end and as it would come to be discovered, a motivating factor in Jaspers’ life. The two men while similar, could not be more different and yet Marts would tie them together unexpectedly when all was said and done which would make the ending of the book even sadder than it originally was, for while one would get what he wanted, the other would not having lost it in those terrible attacks in the year 2001. What was slightly disappointing was the appearance of Sgt. Rock which was good to see but was all it ended up being – an appearance. It would have been far better if the man had starred in the book, but overall, the story that was presented was a good one, a tale packed with emotion – of hope and sadness, dreams and fears and everything else that most men experience at some point during their lives, never mind it being a time of war. Marts writes with passion and it is evident throughout the book and the pencils by Ibáñez are perfectly suited to the task, making it all come to life in the best of ways. So, while more Rock would have been a good thing, this book still ended up being a win on all fronts.