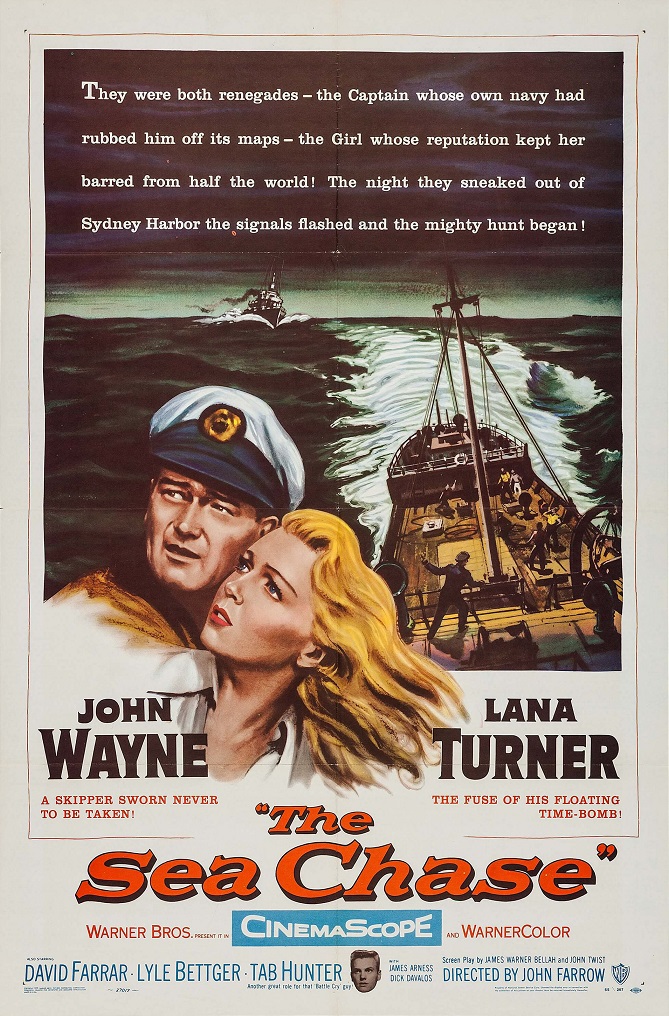 Finding himself on the run, John Wayne has to take his old steam freighter back home to Germany before war fully breaks out and as he does so, finds himself being chased by his old 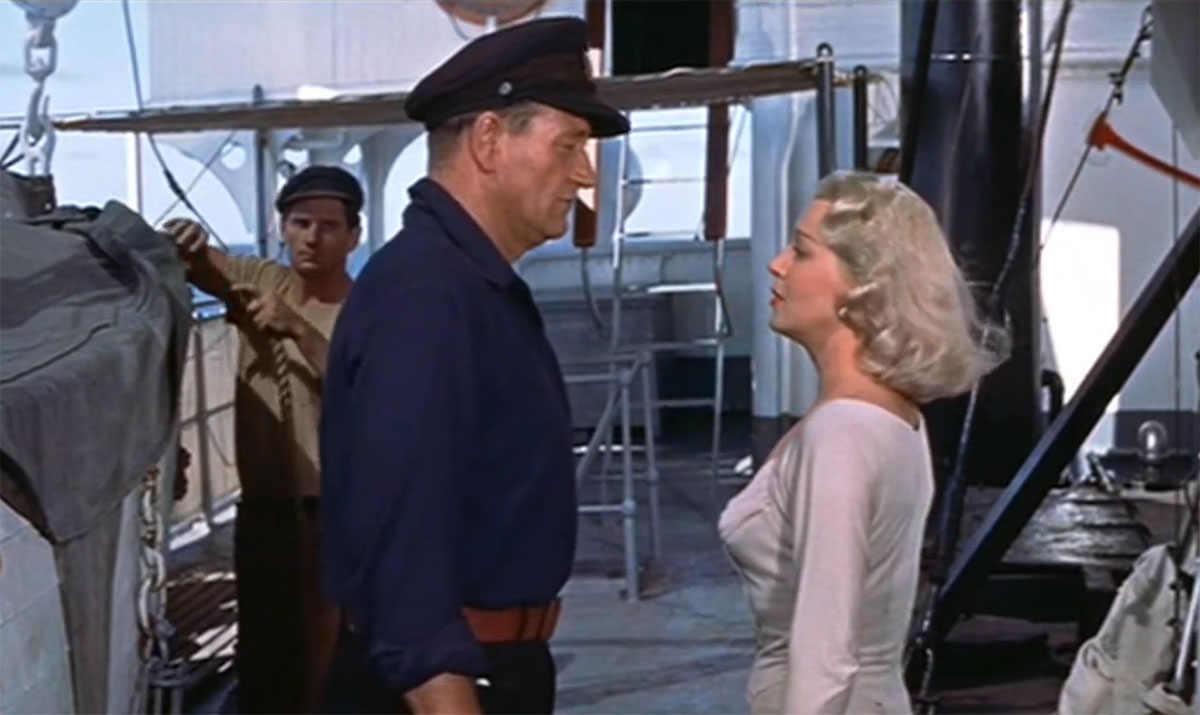 friend as played by David Farrar while trying not to fall in love with Lana Turner.

When one thinks of John Wayne, it is of the hero who saves the day, the man on the side of angels and the quintessential American good guy and that is how movie-goers like it. In The Sea Chase, he is still somewhat of a hero but this time he plays the captain of a German boat, a man who may not ally himself with the enemy – that comprising of those in power back home, at least not quite yet, but is seen as such and therefore becomes part of the plot which drives the entire affair forward. The reason for it is embodied in 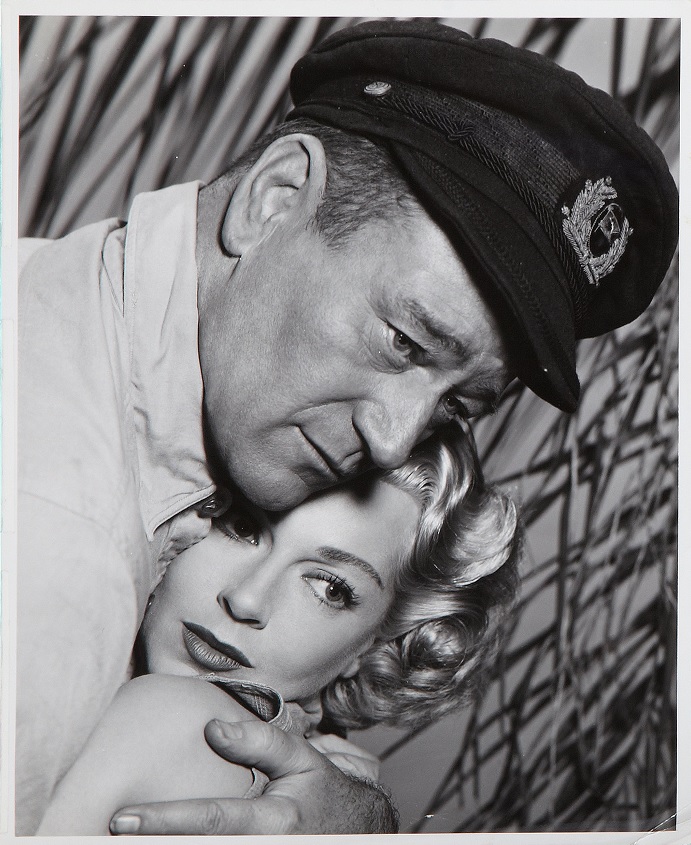 Turner’s character Elsa Keller, a beautiful woman who also happens to be a spy and one whom Wayne’s Captain Karl Ehrlich is tasked with taking back home to Germany safe and sound. On the opposite side of this would be Farrar’s Commander Jeff Napier who would normally be seen as the classic good guy and yet in this case, due to some hurt feelings becomes the villain as he hunts Ehrlich at every step around and across the ocean, a nice twist on a very standard tale. The cast, suffice it to say, is a good one and each is at the top of their game – Wayne as the man who will do whatever it takes, driving his crew past the breaking point and farther still to achieve his goal while Farrar is perfect as the man obsessed. Turner plays the seductress at first and then the woman who supports her man to the end, falling in love with Wayne no matter what he does, unable to help herself. Rounding it all out is Lyle Bettger as the second-in-command to Wayne and a man who is a spy himself for the Germans who makes things worse for everyone aboard when he murders some innocent sailors. Not to be forgotten is Tab Hunter, James Arness, Alan Hale Jr. and Paul Fix who all hold their own against the leads.

Directed by John Farrow, the man makes a great picture filled with all the right ingredients to keep the audience stuck in their seat, 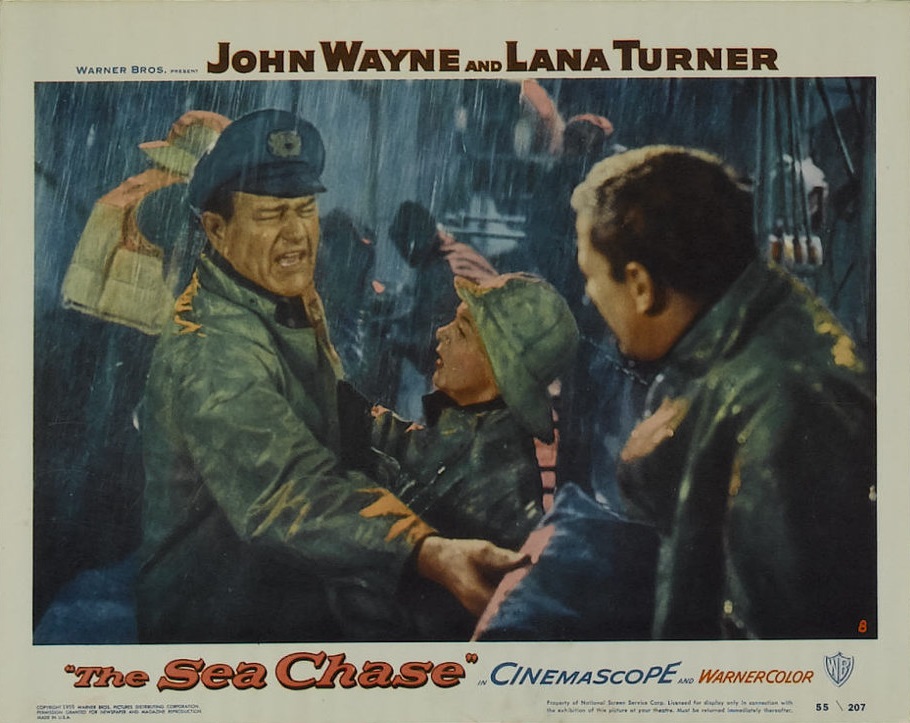 that being a lot of drama, tension, suspense, action and a touch of horror as war often brings with it. With cinematography by William Clothier, the film looks incredible too, whether it be during the great naval battle that takes place towards the end of the picture or the scenes upon the island where Ehrlich and his men scavenge for wood to keep their ship running which Clothier makes picturesque despite the undercurrent of danger that runs throughout. That being said, there is nothing especially groundbreaking to be found within aside from the fact that the movie was partly based upon a factual account which in itself always makes for the best pictures. That ends up being perfectly all right as movies are made to entertain first and foremost and if they happen to rewrite the book as it were along the way, that is all well and good too. Here, Farrow delivers a straightforward piece of action and adventure filled with a bit of romance, culling some stellar performances from the cast.

What would also be a feather in the hat of the makers of this film would be the way they concluded it, leaving it all up to the audience as to whether the ending was a sad or happy one. Most will come away thinking everyone lived happily ever after and there will probably be a few who would think they did not but letting the viewers decide probably worked best in this situation and topped off what ended up being a highly enjoyable movie. 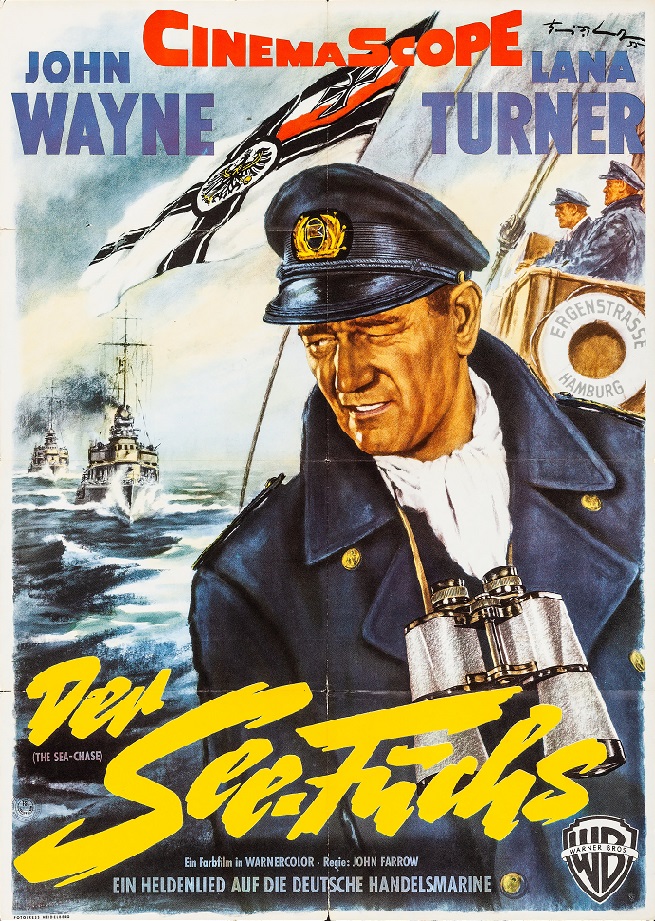