When one speaks of underrated horror movies from the 1980s, Vamp released in 1986 should be part of that conversation. What should have gone down as a cult classic like The Lost Boys or Fright Night instead was waylaid by the side of the road despite having almost all of the same ingredients which helped make those other two

As one might be able to guess, vampires would be on the menu in this film directed by Richard Wenk and right from the outset audiences can see the man going for a lighter tone than most horror films, much like those aforementioned ones though it would not be too long before he would factor in a few scares. It all begins when Keith and AJ look to get a stripper for a fraternity and with little money to their names, they have to go to what can only be called a sketchy part of town. There, they run into Billy Drago who gives them a hard time but he is soon made short work of and they head to the strip club where they look to achieve their objective. Taking the stage soon after they

arrive is Katrina played by Grace Jones, painted up in white and capturing the attention of everyone. When AJ heads backstage to talk to her, it is then when the horror comes into full effect as Katrina just so happens to be a vampire and from there, those who are among the living are going to have their hands full.

On the plus side, Vamp looks great and it seems like no expense was spared as both visual effects and make-up were top-notch. Jones looked incredible as the vampiress who seemed to be in charge, not that she needed anything to make her look any more imposing. During both the dance she would do on stage and her reveal as a vampire, she would stand out above the rest, unique in a film not as wholly original as its lead monster. Perhaps the only real negative to be found in this highly enjoyable romp were all the bits of the comedy that would fall flat – not technically dated, simply not that funny. That being said, there was still a smile and a grin to be had for a most of it given the situation the boys would find themselves in and a lot of 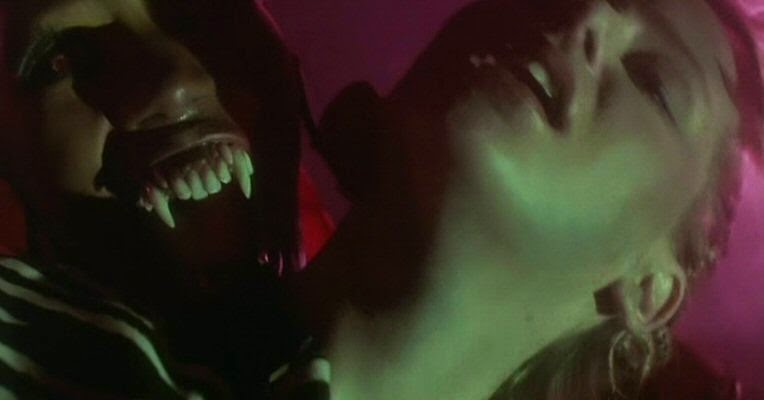 action once it really kicked into high gear during its second half.

As for the cast, they did a great job despite not being the biggest of stars, namely Chris Makepeace, Robert Rusler and Dedee Pfeiffer who would star as Keith, AJ and Allison respectively. Drago made the best of a small role, the man both frightening and perhaps the funniest thing in the movie while Jones of course would nearly steal the show. There is an additional bit of black humour in the picture where the main characters are told that the vamps in the club provide a service by feeding on the degenerates that populate it, an interesting little scene that shows both a bit of adapting to the times and just how far some of these creatures have fallen, Grace’s Katrina in particular. That story might have made for a far more original film but such as it is, Vamp is still a good watch if not one of the most enjoyable horror films to come out of the 80s.