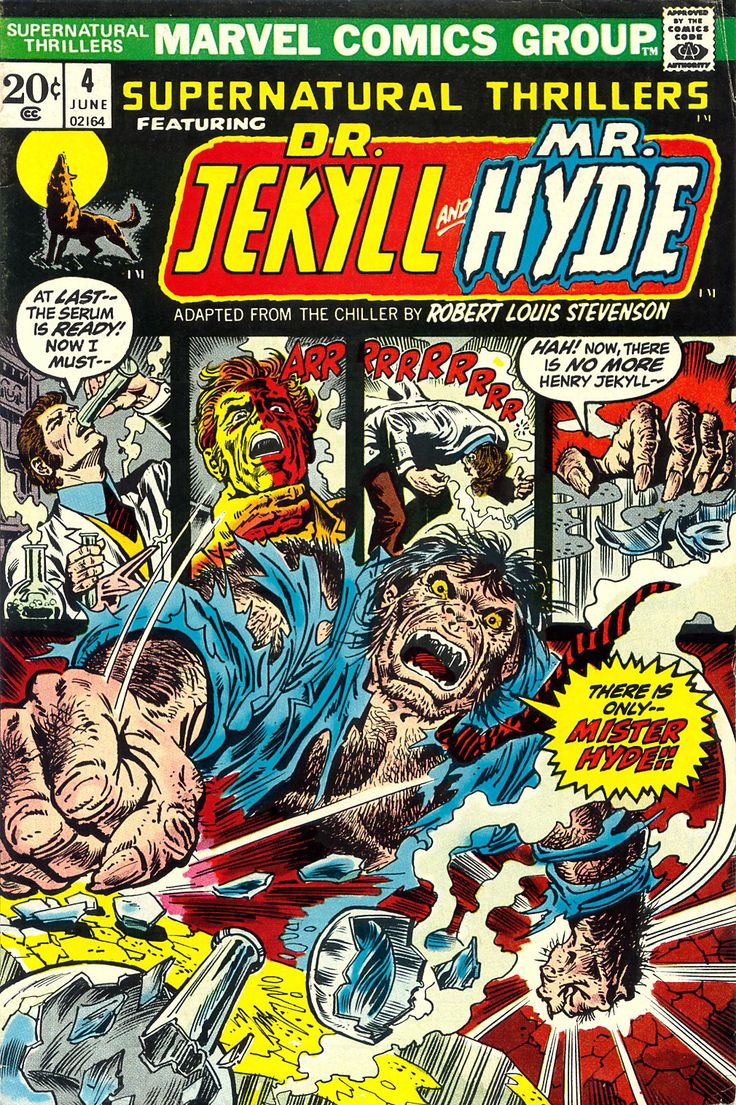 Much like The Invisible Man, the story of Dr. Jekyll and Mr. Hyde has been adapted into various mediums numerous times and so it is that here in the fourth issue of Supernatural Thrillers Ron Goulart and Win Mortimer bring their vision to life. The story finds a man named Mr. Hyde terrorizing London with his boorish and violent behaviour and as time passes, it only gets worse. When Hyde goes to assault a little girl, the man is stopped by a crowd of people and he realizes that there is no easy way out except perhaps through a little coin and thus when paying them off with a check signed by a Dr. Henry Jekyll, it is then that one man becomes suspicious. A confrontation with Dr. Jekyll was all but assured when that check came to light and it does so courtesy of Gabriel John Utterson – the man’s lawyer. He wants to know how it is that a brute like Hyde could be associated with Jekyll and while it is obvious that there is some sort of connection, Jekyll refuses to speak of it. Further misdeeds and malevolence are committed by Hyde over the next number of days and soon the man is to be hunted down and once again Utterson decides to confront Jekyll over the matter as he believes there has to be some sort of undue influence upon his friend. It is here that Goulart has Jekyll reveal just what has happened until this point in time, how it is that Hyde comes into the picture and why and it all boils down to Jekyll being unsatisfied with his life. Being a scientist and a doctor, Jekyll decides to see if he can free his other self so that he might enjoy the things he did when he was younger but like many things in life, it does not go according to plan and the end result is the monster called Mr. Hyde. The horror of what has been happening has not been lost on Jekyll and so when it all finally comes to an end after falling from a rooftop while running from the police, one has to think that he finally found some kind of peace. Altogether Goulart and Mortimer did a good job at conveying the vision of Robert Louis Stevenson’s novella but for the purposes of the comic, even though younger readers would be picking it up, it could have been just a little darker in tone to really push that horror through. Still, it worked well and was an entertaining read.