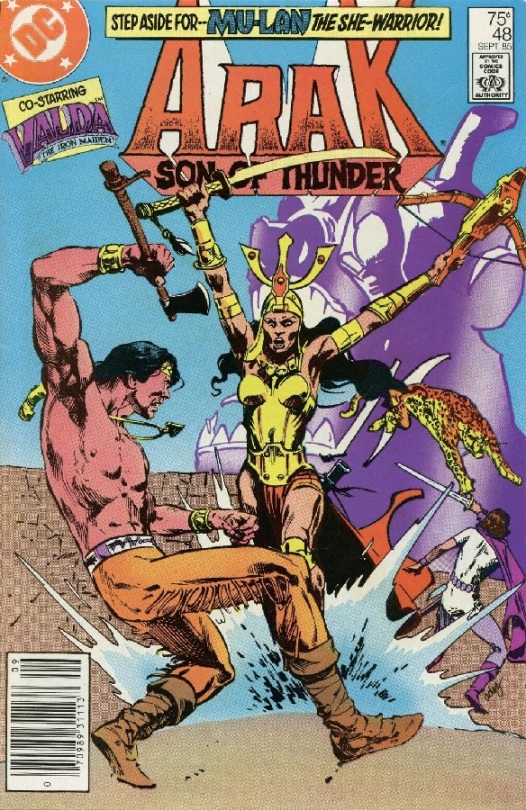 While they never expected an attack though in a way they are always ready for one, Arak and Valda find themselves facing off against Mu-Lan and her cheetah Mingfei. Though they might have been relaxing, this battle never becomes one as Arak makes short work of Mu-Lan after which she declares it has been a test, a trial to see if they are worthy of meeting her master. Malagigi is intrigued about it all and the three of them agree to follow Mu-Lan so that they might meet her benefactor who wants to meet them. It is there that they are presented with warnings and advice in the form of riddles and Arak decides that he needs to think on it, though readers can see that he has most likely already figured out the old man’s words. So it is that the companions have dinner with the brother of Re-Is Hazz at the house belonging to the woman Arak saved from the dragon and it is there where a number of things come to take place. The first would be the return of Haakon who tries to give them drugged wine and instead ends up taking it himself thanks to the return of another character from the book’s past – Brunello the thief. Next is the arrival of the old man that they went to see earlier whose arrival has somehow signalled a dragon to attack, though it is the old man who is the target. The action picks up immediately and artists Carmine Infantino and Tony DeZuniga make it all quite exciting as Malagigi, not Arak, jumps into battle to take care of the threat. All of this leads to what is perhaps the last major plot thread in need of being taken care of before the title ends in two issues time – that of Angelica whose machinations Arak now sees before him. Written by Roy and Dann Thomas along with R.J.M. Lofficier, they create a book that is packed with drama, mystery and action aplenty, one more step on the road to its final issue and yet again, it turns out to be an excellent read. What will be interesting to see is how this eventual showdown with Angelica is going to take place and why of all places, would it happen in Canton and not in Arak’s homeland? Still, a great tale overall and one that keeps readers wanting more.