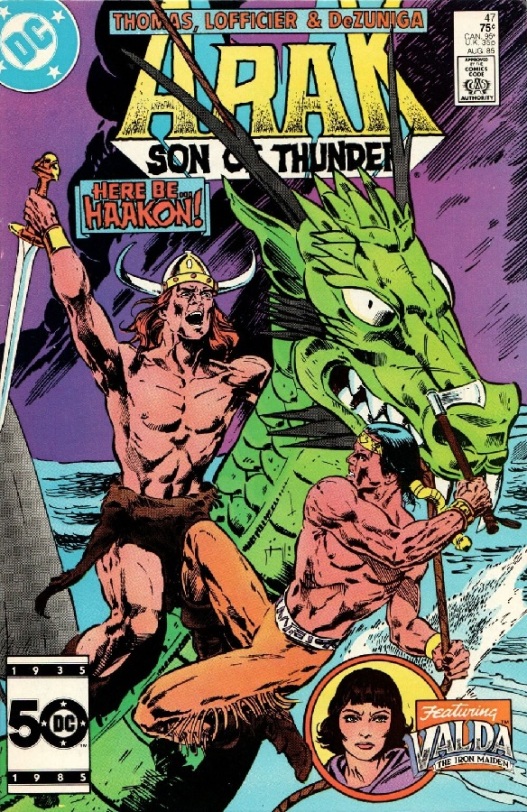 Narrated once again by Re-Is Hazz, otherwise known as Captain Lucky, he and his charges now find themselves approaching Canton, China and they do so during the Dragon Festival, something that gives Arak a very bad feeling. At first, they think they are under attack by dragons due to the fog, but when it clears they discover that many of the Chinese ships bear a dragon’s image upon their bow. While Lucky tries to appease everyone telling them that all will be fine, Arak’s bad feeling turns out to be true as a real dragon that dwarfs all of the ships around them attacks with incredible ferocity. There is not so much a battle as there is simply trying to rescue everyone during the aftermath and while Lucky and his ship do its best, there are some they cannot simply seem to save. As for Arak, he dives into the ocean in order to help two women who are too far away and are in immediate danger. While he does save one, he himself is in need of saving and when he passes out, it is Haakon of all people who drags him back to the boat. Having not been seen in quite some time, Roy and Dann Thomas and R.J.M. Lofficier give readers the rundown on just what the Norseman has been doing since those days when their paths last crossed. It of course involves a little swindling and a bit of killing and now, here in Canton, a bit of subterfuge as Haakon looks to increase the wealth he has already made. After a little meet and greet with various people, Arak and Valda look to spend a little time together when they are attacked by a woman named Mu-Lan, leaving everything on a cliff-hanger until the next issue. Though it would seem that little had transpired in this issue, most of it being taken up by the dragon attack, it was still very exciting and an incredibly great read as Arak’s world and that which he inhabits continues to get bigger while coming full circle with that of his past, namely the arrival of Haakon once again to these pages. Tony DeZuniga’s artwork is breathtaking at times and truly some of the best the man has ever produced. With a bit of humour, surprise, drama and a ton of action, issue forty-seven of this book does not disappoint.