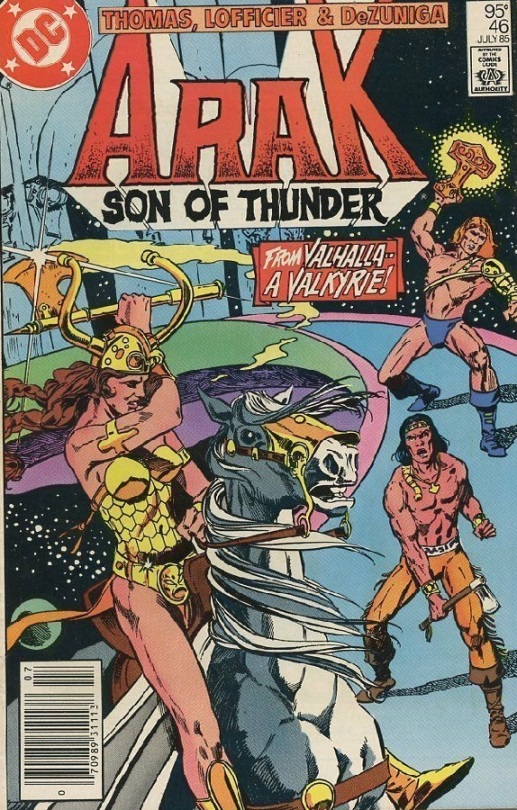 Their destination still beyond their reach, Arak and his companions which include Malagigi, Valda, Alsind and Satyricus among their number, are spending yet another day aboard the ship belonging to Captain Lucky and the general mood is slightly souring. The trip has been a long one and while the Captain tries to entertain them with his various stories, even he knows that his vaunted tales are no match for the adventures that his charges have had of late. As his story ends, Satyricus manages to catch a bite on his fishing line which turns out to be a whale, leading to a little bit of ribbing in his direction. This reminds Arak of a time when he was still with the Vikings when he was younger and as such, another tale to keep them all entertained. It begins with a whale, a dead one that Arak and his Viking brothers had found upon the shore which leads them to claim it so that they might feast and celebrate. As it is, a rival clan also lays claim to it and so a battle is fought and it is particularly bloody. Soon it is down to two men – Arak and the leader of the rival clan and not far from where they fight, a valkyrie awaits, ready to take the fallen away to their just rewards. Passing out from blood loss, Arak soon awakens with to find himself with the valkyrie and in the realm of Othin where he meets the rest of the gods including Loki and Thunor. It is all quite unbelievable and yet it must be true and he must have died and while he stands there, Loki decides to stir things up with his brother and with Arak – both sons of thunder. Roy Thomas, Dann Thomas and R.J.M. Lofficier write a fun tale, one a little different than what has been happening of late within the pages of this book and it turns out to be quite good and more than entertaining. Tony DeZuniga returns to take full control of the pencilling and inking and it all looks as incredible as ever, especially the fight that takes place between Arak and Thunor. There is of course a happy ending to it all and altogether, it was a diversion that was more than enjoyable for both the crew and for readers.