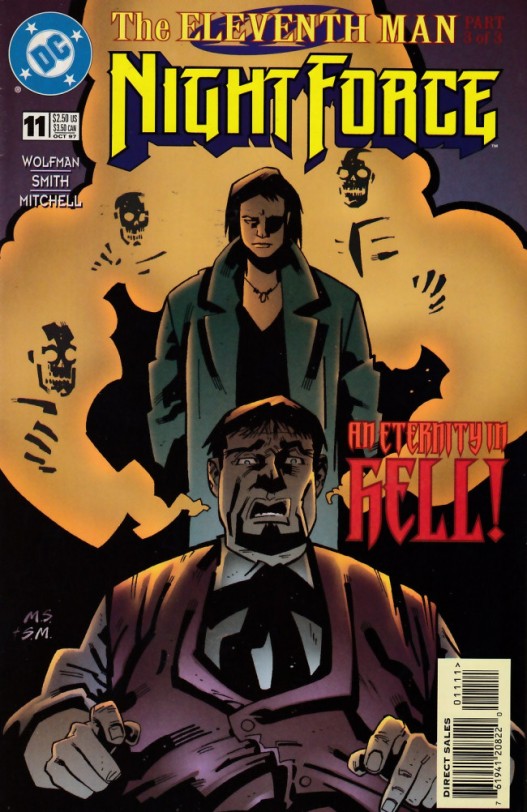 The fate of the Eleventh Man is sealed and thus so is that of the Twelfth, both slated to die and all the souls that were to inhabit them, those unwanted from both Heaven and Hell, are now on their way to the permanent, eternal shell of the Thirteenth Man. As Marv Wolfman has pointed out in previous issues, Baron Winters is that thirteenth prison and it is all the Baron can do from going crazy at the thought that his soul will be no more and his body a house for thousands, perhaps millions of restless souls. Helping the Baron to try and stop this eventual fate is Zadok Grimm and Wisp and they have found the Twelfth Man, one Richard Cory who was introduced in the last issue as a man who could not experience any sort of feeling in any way. A lifetime of being unable to feel has finally caused him to snap and thus after kidnapping a boy and bringing him to the roof of a building, Cory starts firing a gun upon the crowds of people below, killing many. As fate would have it, Richard Nixon dies and the souls he contained within him were finally set free to find the Twelfth Man and for Richard Cory, it is the greatest day of his life for with them entering his body, no matter if they are damned or not, he finally feels something and it makes him happier than he has ever been. As fate would have it though, the Twelfth Man was only a temporary housing and as Richard Cory dies, those souls go in search of their new home, one Baron Winters. Out of the three issues in this current storyline, this one is the strongest of the bunch as Wolfman finally ties things together and everything starts to make sense. While it is good to see Baron Winters finally take the spotlight in one of these stories, he still manages to stay more or less behind the scenes, the book focusing more upon Richard Cory and Zadok trying to stop him. There is also a mysterious woman who appears and who seems to want to aid the Baron and when it is all said and done, the Baron is missing in action, quite possibly in Hell leaving readers on a cliff-hanger which leads into the last issue of this particular volume of Night Force.