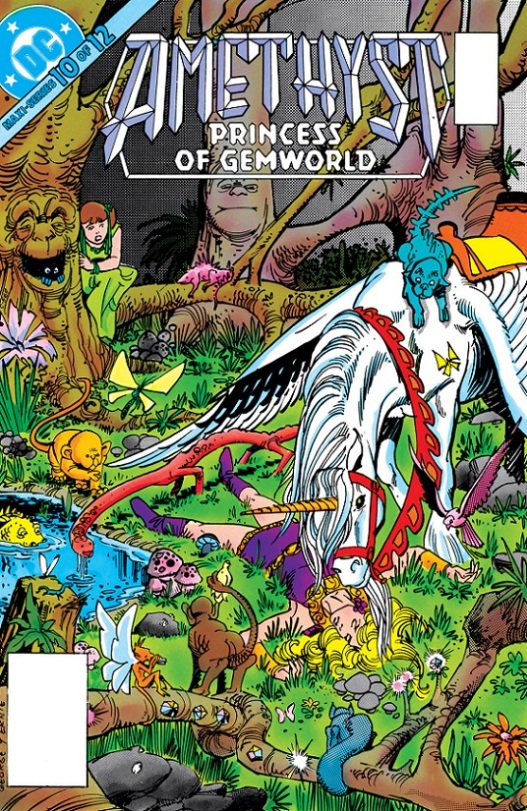 Dark Opal is a very confident man.  While he already has more power than most upon Gemworld, he wants more and to attain it, has collected the gems of every household, all but that of Amethyst which he will soon gain – it being only a matter of time.  Dan Mishkin and Gary Cohn know how to write a good villain and Dark Opal ranks up there amongst the best of them.  He has the look and the temperament and he treats those around him as nothing more than slaves, worse even and those who are on the receiving end of his admonishments, his berating, his wrath, know him for the monster he is.  When the book turns to Amethyst, she and Prince Topaz are together, slowly falling in love when things finally turn to talk of the House of Emerald and of Dark Opal.  There is also the issue of Amethyst’s missing gem that the dearly departed Granch had been using and which now rests in the hands of a dragon, one which is being chased down by Carnelian.  No matter what, the gem cannot fall into the hands of Carnelian or of Dark Opal for with it, Opal will have access to unlimited power and that cannot be allowed.  So it is that a mission occurs, one which Amethyst takes upon herself as it is the stone of her house that is under threat and yet she takes along one of the Emerald princesses due to her very unique abilities.  What follows is a battle against Carnelian who looks to gain the stone to curry favour with his father as well as the usage of many Earth weapons including a snowmobile and while it should have been no contest, Carnelian manages to capture the object leading to what can only be a dark future.  Ernie Colón is the man that continues to make this book look as good as it does and while there was not as much going on in this issue compared to others, there was still enough present to move things forward to what can only be a confrontation between the forces of light and dark.  There is one additional thing that readers might have picked up on that Cohn and Miskin made note of to relate and that is the fact that Dark Opal has contracts with many other strange beings like the Emissaries of Varn and so it remains to be seen just who it is he calls upon for help, should he need to do so when it comes to that point.  Altogether a fun issue but one that could have used a little more meat on the bones.