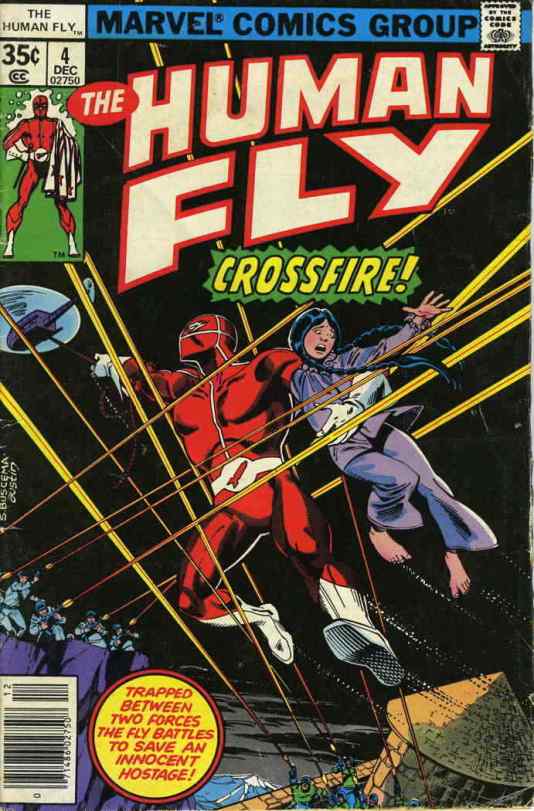 Having agreed to take on a mission to rescue a man’s kidnapped daughter from his rival, The Human Fly is finding it all a little bit tougher than he thought it would be. At the moment, he has been captured, confused after reaching the little girl and finding out that Mr. Martinet is the girl’s father – maybe, and that Dreir is not. It is a very puzzling situation and because of that, he gets knocked out, his fate uncertain. Thankfully, not long after, he awakens before they can do whatever it is they were going to and takes his life into his own hands and escapes into the tunnels leading down into the mountain. Unbeknownst to him, there is great danger that way in the form of giant cats that Martinet had been holding captive. While all of this is going on, Martinet and Dreir begin a literal war with each other, author Bill Mantlo revealing a little more information to the reader as to just what business they are in – the two being arms dealers and that the both of them are actually the little girl’s fathers, one her real dad and the other her step-father. Eventually, the Fly makes it out of the mountain and learns all of this too, his concern not only being able to stop this makeshift war that is taking place but the safety of the girl who is in the middle of it all both figuratively and literally. As guns blaze and emotions run hot, the little girl is about to die and it is only The Human Fly who is able to save her as Dreir and Martinet are too preoccupied with each other to notice. At the end of it all, Mantlo gives readers a happy ending of a sort, which does not include Dreir, Martinet and the girl among their number as each of them now face some challenging times ahead. The Fly might have ended their bickering and their battle for the moment, but their child is now in the hospital and the shame they feel is very real. Taking a backseat for much of the issue would be the supporting cast who are just as interesting as the Fly himself, but hopefully, Mantlo will give them bigger parts to play as the series goes on. As for Lee Elias who draws it all along with Rob Santiago and George Bell aiding him in making it look good, the man does a great job at making all the action come to life, a perfect fit for the book if there ever were one.