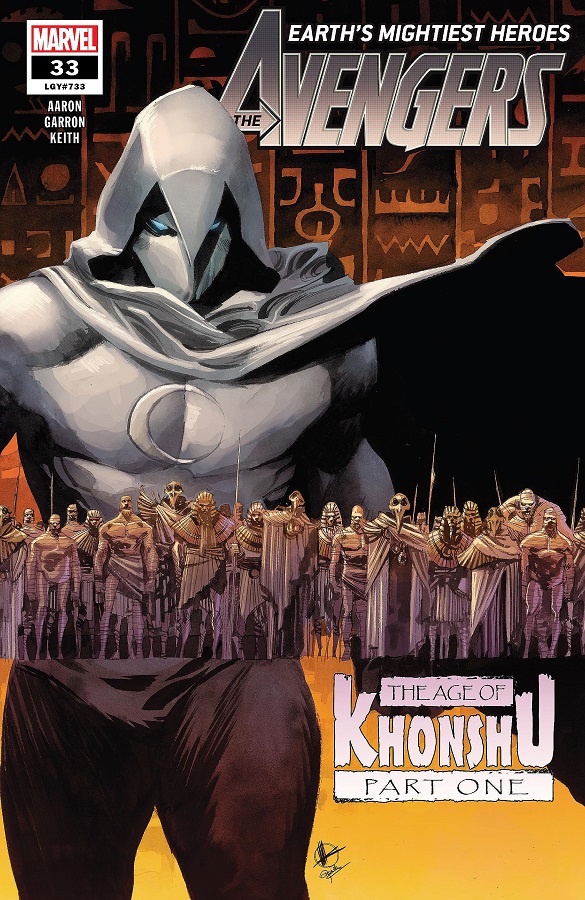 The Story – It begins with Moon Knight defeating Iron Fist in the mystical city of K’un-Lun and it ends with him besting Thor on the surface of the moon. All of this to defeat the devil.

The Take – Jason Aaron’s run on the Avengers has been consistently good, some arcs better than others and with this first issue to the latest one called The Age of Khonshu, it may just be the best yet if it is anything to go by. Starring Moon Knight who takes on and defeats some of the most powerful heroes of the Marvel Universe, it is a definite sight to behold and Javier Garron makes it all come alive in the best possible way. It begins with Moon Knight battling Danny Rand, the Fist of Khonshu against the Iron Fist and it is a fight that was completely unexpected when the book opened up and it only continued from there with fights against Doctor Strange, a theft from Robbie Reyes, a surrender from the Black Panther and a battle that saw Moon Knight crash moons into Thor and stealing Mjolnir. This was a highly, unexpected issue and it ended up being a pure joy to read from start to finish. When it ends, the Devil is mentioned, though with little to go off of than that, it remains to be seen whether that particular devil is Satan, Mephisto, Blackheart or some heretofore unknown demonic entity. Also of note is the demeanour of Moon Knight who seems to have more focus than usual, though that can be due to the super-moon that is currently taking place or the influence of his patron, Khonshu who also makes an appearance during the conclusion of the story. All that one can say at the moment is that this book brought a lot of fun to the table with the creators doing their utmost to make it so.