The year 1953 would see quite a few big releases from the likes of Stalag 17 to Peter Pan to Calamity Jane and more and amongst all of those films would be a modern western drama called Blowing Wild led by the one and only Gary Cooper. Not to be outdone would be those starring alongside him, namely Anthony

Quinn and Barbara Stanwyck, the latter of which would all but steal the show from Cooper.

All of it would begin with Cooper as Jeff Dawson and friend Dutch as portrayed by Ward Bond, drilling for oil on a fresh claim and then having it all blown to smithereens by bandits. A chance meeting soon happens with an old partner named Paco, which is where Quinn comes in. He offers Jeff a job and while it seems like he is too proud to accept such a handout, it is not pride but guilt as he and Paco’s wife Marina as played by Stanwyck used to be an item. The audience can guess from this point as to where the film will lead, but despite its familiarity of it, the smart dialogue from Philip Yordan and the

exceptional cast keep those who are watching firmly planted in their seats. Such as it is, the bandits make a return, Paco gets wise to what is going on behind his back with his wife while Jeff only wants to get away, having found love elsewhere and all of it heading for a showdown between the various parties.

As previously stated, Stanwyck steals the show as the femme fatale, her character may be in love with Jeff as she states, but definitely obsessed with him, the one thing to get away from her that she wanted with all of her heart. At one moment Stanwyck is flirtatious and alluring, doing what she must to gain the object of her affection and the next she is

cold, angry and frightening, unhinged to the point where she is ready to commit murder and does so in the final act of the film. She is fire and ice throughout the movie and is the perfect addition to the solid if staid performances from Cooper and company which permeate the rest of the picture. Saying that, there is not a single bad showing from the cast, all of them quite good and Cooper has always been a dependable lead, but Stanwyck stands out and does so quite boldly and if it were not for the fact that the story was about Jeff Dawson, she surely would have headlined the bill.

Directed by Hugo Fregonese, the man weaves it all together skillfully, though he too takes few chances and the film only looks as good as it does thanks to the cinematography of Sidney Hickox. Dmitri Tiomkin provides the incredible score that floats in and out of the movie and is combined with a ballad by Frankie Laine whose voice is always a pleasure to hear come over the opening credits, his track also coming in and out of the picture as it moves along.

Altogether, Blowing Wild is a very solid film that might have slipped between the cracks if not for its cast, specifically the ever-incredible Stanwyck. 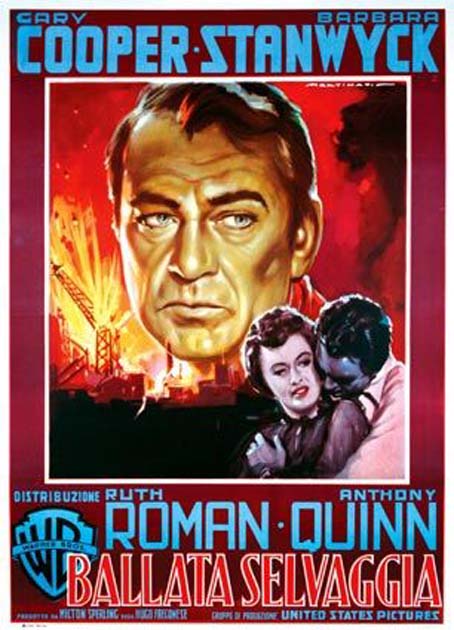