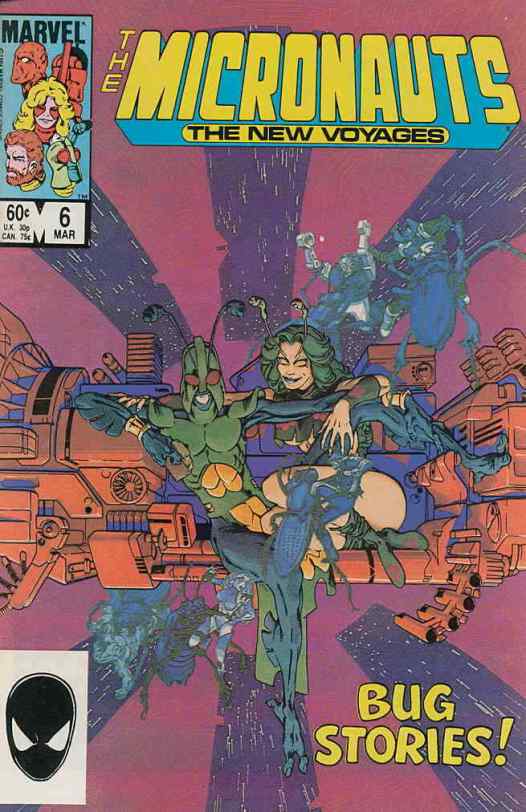 Bug has left the Micronauts, the most boisterous member of the team feeling a little down and out and maybe more than most, missing his home planet as Kaliklak calls out to him. A lot of people feel homesick over the course of their lives and readers can empathize with Bug as he has been away for many years, only getting to visit infrequently and only then to battle the forces of Baron Karza. Accompanying him is the alien called Solitaire, a shape-changer who has assumed a form akin to Marionette’s yet with features from those of Bug’s race. He is grateful for the company, but he cannot help but think about what it is the other Micronauts are currently doing. Are they getting into trouble without him? There are all kinds of things that his team could be doing and all of them, without his being there, could mean less of a chance of coming out on top when it really mattered. Peter B. Gillis and Kelley Jones present a different kind of tale with this issue and it turns out to be a lot of fun, not only in seeing what it is that Bug conjures up about his friends but in the way the book is laid out and how it reads. It goes by quickly and throughout it all, the focus is put squarely on Bug, his hopes and fears and insecurities and the moment when he finally comes around to the fact that he cannot just abandon those he calls family. For being an issue that was essentially inconsequential, it turned out to be an entertaining read and a nice break in-between what one has to assume is more trouble for the Micronauts.