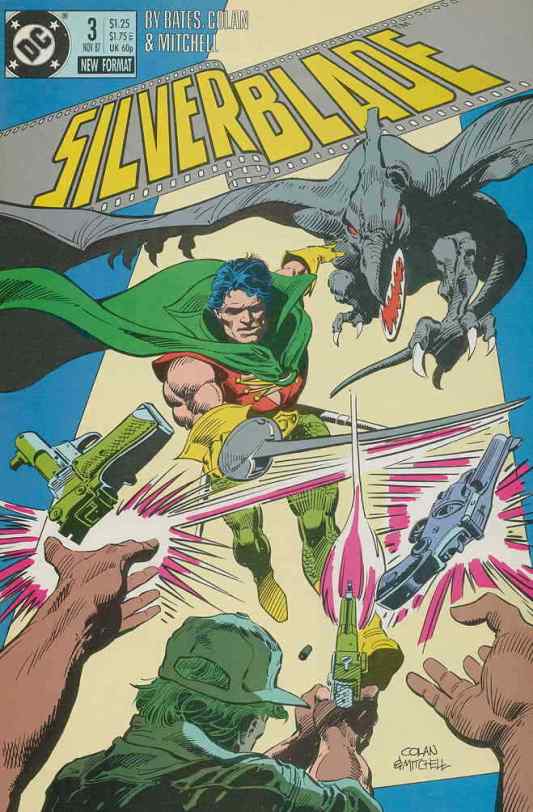 Silverblade is a story of two very different people, one of them being Jonathan Lord and the other a reporter he has been spending time with named Belinda Pryce and while the paths of the two obviously intertwine, they end up being two different tales indeed. For Belinda and being a reporter, she knows that there is something truly different about Jonathan Lord Jr. and she means to find out, especially after finding him in her bed after one of his transformations and then seeing it not a few minutes later with her very own eyes. This leads to her wanting to have another date with the man, attempting to discover what it is that he is keeping from her and finally to attend a séance with him which in the end, does not go as planned. Writer Cary Bates still focuses on Lord for most of the issue though, a man trying to re-discover his place in the world while figuring out what this new time has to offer him. It is all very strange and not making things any easier are these anomalous men who are out to kidnap him for a Mr. Vermillion. Suffice it to say, the kidnappers do not know what they have gotten themselves into and even after a spectacular failure the first time, they mean to try again much to their dismay. While Bates plays around in the present, this book is as much about Lord’s past as it is about his current situation and so he brings one of Lord’s former flames into the book in the form of Sandra Stanyon, perhaps the woman who meant most to him or at the very least, the woman who never got over him. Having seen Lord Jr. in the press, she has decided to reach out and does so with some bait she knows Lord cannot refuse – the only missing film in his catalogue. By the end of the book, Bates has had Lord confront a few things about himself, though whether he learns from them is another matter. The first and perhaps most important is that he must leave the past behind if he is to succeed in his current life with the second being the need to adapt, intrinsically entwined with the first. Lastly, the man’s powers while limited, seem to let him do a variety of things making him quite powerful and thus a target. Throw in some exquisite pencils from Gene Colan and a mystical bird and this book is a true menagerie of ideas and genres that cannot be passed upon.