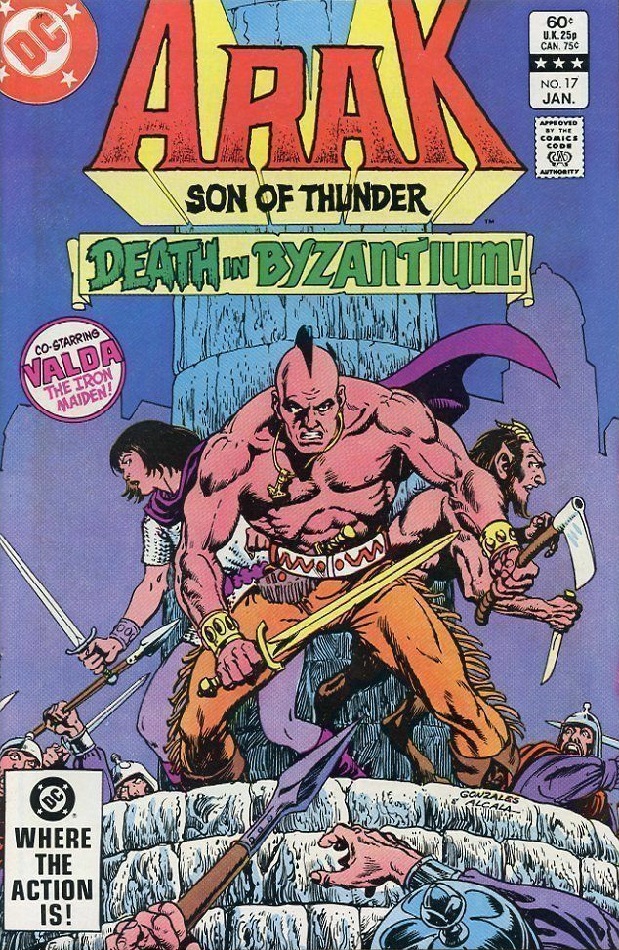 Trapped in the castle of the Byzantium Empress, Arak and Valda find themselves surrounded by her soldiers and all there is left to do is fight if they are to live. With the odds stacked against them, they do their best even when Valda is knocked unconscious, but it all comes to a halt for Arak when confronted by the one-two punch of Haakon the Viking and the court wizard. With the heroes down and out for the count, writer Roy Thomas reveals that Haakon has come from White Cathay in order to learn the secret of Greek Fire in order that they might defeat their enemies, but the Empress is wary. It is then that she makes a deal with Arak who is now being held in her prison, for she does not want to give the secret of her country’s greatest weapon away for nothing, nor to be conned out of it. Arak is meant to be her safeguard and he agrees to be as such if she will also free Valda and Satyricus. So it is that the exhibition of Greek Fire is to happen and the betrayal that the Empress knew was coming did indeed manifest which spurs Arak into action, but the man is soon overcome and made to witness what looks to be the death of his friends. Drawn by Adrian Gonzales with a little help from Alfredo Alcala, each page and panel look incredible, the action coming alive perhaps better than ever and making for one of the best sword and sorcery titles ever produced. All of this continues in the second tale featured within, another starring Valda from years past in a place called the Isle of the City. It is here that she and Malagigi come to find a bit of rest and do so with his friend of old, one Greeramada, a witch youthful in appearance but experienced in magic. Here she convinces Valda to seek out a reliquary from that self-same thief who sold her the baby elephant and once it is done, learns that not all things are as they appear, that people change and not always for the better. It is not just Valda who learns the lesson though, but Malagigi as his old friend and once-lover is looking to kill them all. Starting on the first page until the last, the book is packed with excitement, intrigue and action and definitely delivers on all counts.