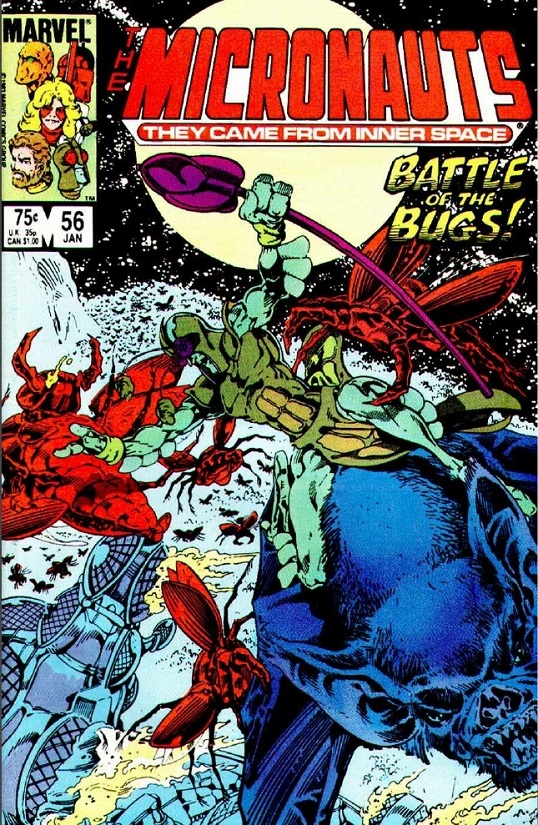 With ideas running somewhat short among the Micronauts on where to find more allies, Bug offers up the people of Kaliklak as they have successfully rebelled against Karza in the past with the Micronauts help. So it is that Marionette and the rest of her team head to Bug’s home world aboard Bioship, hoping against hope that they can find a bit of help. Bill Mantlo and Butch Guice tend not to make things very easy for the team though as proven in previous issues and so it continues here as once they arrive, they encounter a storm unlike any other, one that rains down Battle Beetles, ferocious creatures that destroy everything in their path. Bug knows that chaos is going to reign on Kaliklak and so he and his companions go not only to find allies in the fight against Karza, but to protect the new queen who has yet to be born. There is a bit of humour present courtesy of Mantlo and it is all quite exciting as drawn by Guice, but what makes it all worthwhile is the ending of the book. That might seem strange at first, but as the Micronauts leave their adventure behind on Kaliklak and sadly without the aid that they need, they do get something at least in the form of Arcturus Rann who has finally come to an understanding with the Time Travellers. Going forward, Rann will fight as a man with everything he has in him, surrounded by his friends and teammates, no Enigma Force needed. Karza also came to the same realization earlier on in the book and means to do the same, no sorcery needed and it is perhaps the first time in the series that Karza is seen without his mask on, at least in present times. So it is that the Micronauts have a happy reunion as it is with his friends, all things seemingly forgiven as if they never even happened and Marionette once again in his arms.