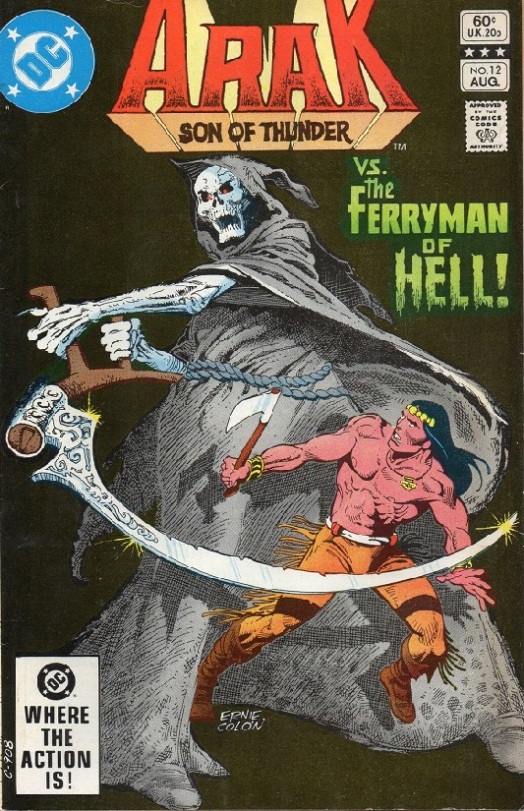 It is upsetting to Arak that his newfound friendship with Khiron the centaur is to be short-lived, the man-beast having been cut down by the Byzantium soldiers and while it seems as if he has been killed, he is only mortally wounded. Given his nature and his background, Khiron begs Arak and Satyricus to leave him be while he climbs Mount Olympus that he might enter Hades on his own four legs, to which the companions agree. Such as it is though, the Byzantiums end up following Khiron, looking for a payday from their empress, willing to follow the centaur past Cerberus and straight into Hell. There is no choice then but for Arak and Satyricus to follow, to somehow make it past Charon who guards the river Styx and save their friend from any further torment. Having to depict the various creatures of myth throughout, be it the three-headed dog called Cerberus or Charon or even the fight along the shores of the Styx, Ernie Colon and Alfredo Alcala truly outdo themselves in making the book incredibly exciting with some of their best work to appear in the title yet. There are questions of course that Roy Thomas never manages to answer though it is hinted at, such as how Arak can survive in the waters of the Styx which usually mean death to any living thing, no doubt it is sure to come in time as Arak makes his way through the world. Additionally, Thomas is joined by his wife to present a back-up tale starring the one and only Iron Maiden – Valda. The story would go on to recount the details of her origin story, of her birth and of her mother who was a knight of Carolus’ court. While still a child, Valda’s mother Bradamante died in battle, a knight to the last and Valda would end up being raised by Malagigi and trained by a ghost in the art of sword-craft. As such, Valda would end up wanting to be a knight just like her mother and while Carolus Magnus would refuse, in the end, he would end up relenting after a little bit of trickery on Valda’s part. All in all, Valda’s tale would be a fun one, but it would be the lead story in the book that would keep readers on the edge of their seats with action and myth come to life.