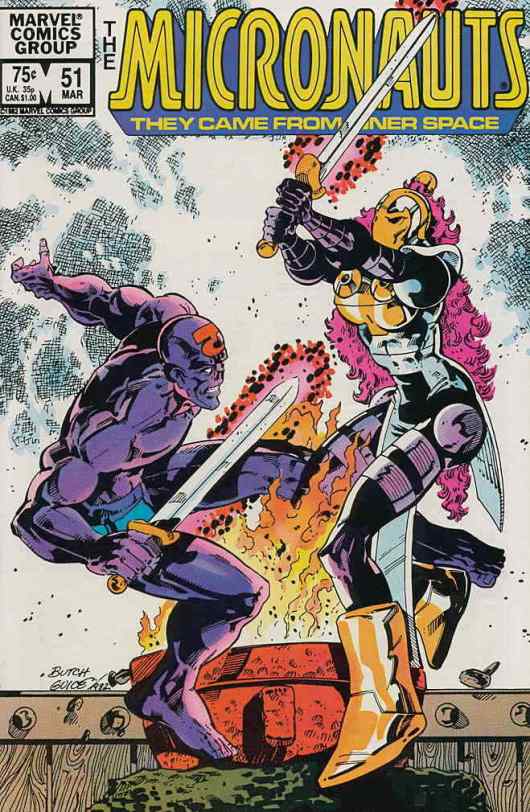 With the Micronauts rising to the occasion over the course of the last few issues, fighting to reclaim their planet and free their people from tyranny, this book gives readers something a little different in nature, that being the Micronauts on the run. At the moment, as they flee in the giant Bioship, Marionette and her companions wonder why they are running at all to which Rann can only respond with is that should they face Karza at the moment, they will lose. However, as Acroyear and Bug are quick to point out, that does not apply to the Dog Soldier’s ships which now pursue them and are starting to wear Bioship down. Be that as it may, Rann will not or cannot engage them, the man for whatever reason, keeping his own counsel. It breaks Marionette’s heart to see him as such and when Rann retreats to his quarters with Fireflyte in order to meditate, she takes matters into her own hands. It is at this point that Bill Mantlo and Butch Guice kick it all into high gear as what remains of the Micronauts head outside of the ship to face-off with their pursuers in what can only be called one of the greatest space battles to ever take place in this title. While the companions might only number four in total, they have been honed into hardened warriors over the course of their time together and they work well as a fighting unit, Karza’s men not knowing just what it is they have gotten themselves into. All of it is absolutely thrilling and becomes even more so when Bioship finally enters the fray, free from having Rann’s permission and able to protect his friends and himself from all those that oppose them. The battle, such as it is, is short-lived and while the Micronauts are glad of a victory, it does not last for long for they encounter a giant armada, far outnumbering their single ship. Acroyear recognizes them for his own people and somewhere inside of him, he knew that this day would come. Mantlo and Guice make these last few pages both emotional and powerful as the king who was branded a traitor by his own people must face them again to prove his innocence. Coming face to face with his former subjects and above all, the woman he loved in Celicia is not what one would call easy, but Acroyear will do what he has to do while the rest of the Micronauts stand idly by, unable to help their friend should anything go wrong. This was yet another great issue in a book that continues to get better with every passing chapter, riveting being a word simply not strong enough to describe it.