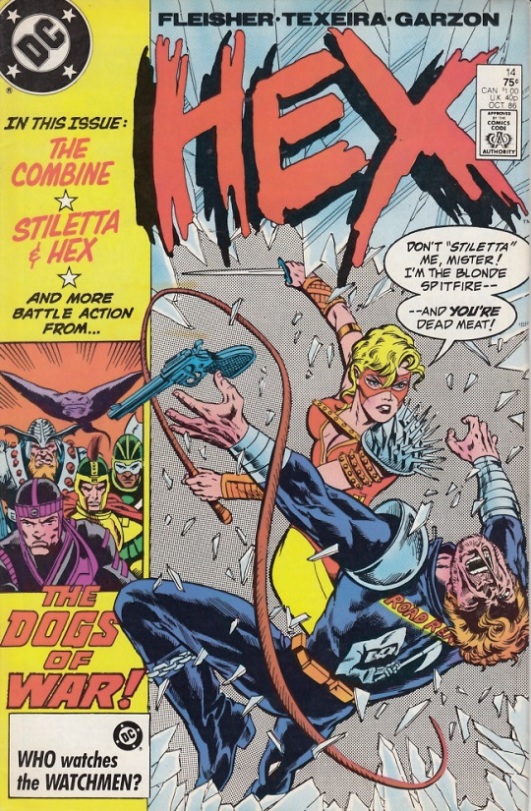 There are quite a few things happening within this issue and Michael Fleisher along with Mark Texeira and Carlos Garzón begin it all where the last book left off with Hex having hijacked a limousine containing two members of the Combine syndicate in order to find out just where it is Stiletta might be. The action starts on the first page with a car chase, one which sees Hex in the thick of it and giving it his all despite the continued strangeness of the future. Suffice it to say, Hex knows how to outwit those he needs to and when all is said and done, those who are after him are no more. It all continues into the next segment of the book where the gangsters are deciding on what they are going to do with Stiletta, now called Spitfire, and whether they can continue to control her and then finally into the third which features the Dogs of War. It is here that the Dogs are attacking one of the Conglomerate’s Soames plants and while the Conglomerate has some impressive defensive capabilities, the Dogs of War are even more so and they manage to take the place down, each member of the team displaying some incredible powers at their command. Despite the interludes, it all leads back to Jonah Hex though as he tracks down Stiletta, but it is not the same woman he knows as her brainwashing is in full effect. So it is that Fleisher sets the stage for one of the fiercest battles to take place in the book and all of it drawn quite gloriously by Texeira, the action quick with Hex on the ropes. Eventually, the former cowboy comes out on top and he hopes that the woman he knew is still inside of her somewhere because if she is not, he has no idea what he will do. Like a few issues before it, the story ends on a bit of mystery with Jonah learning of a potential way to get back home and that strange alien who has been collecting slaves from the dregs of society discovering that he needs more if his plan is to come to fruition. What that plan is, is still a mystery, but readers should have faith in Fleisher at this point that all will be revealed quite soon. Another excellent issue in a series that can be called just the same.