Whenever Superman teamed up with Batman or Spider-Man with the Fantastic Four, it was always seen as somewhat important because something big must be happening for them to do that. When Superman met Spider-Man in 1976 it was magical because never in a million years did anyone think it would ever happen

and thus would begin one of the better gimmicks devised by any company – the crossover. So well did it work that the two heroes would meet again five years later followed by Batman vs. The Incredible Hulk and the Uncanny X-Men meeting the New Teen Titans. Not only would it expose fans to other heroes and comics from the Big Two not to mention selling a ton of books, but it would be a gimmick copied by everyone that would follow in the hopes that they could cash in on that same magic.

In the 1980s the Teenage Mutant Ninja Turtles would meet Cerberus, Flaming Carrot, Usagi Yojimbo and more, though they would 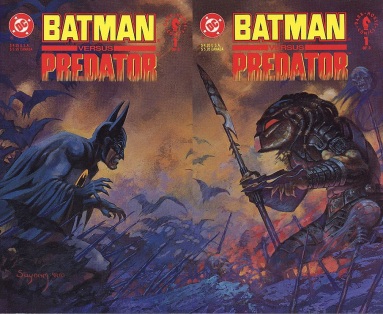 fly a little more under the radar than those from their main competitors. The decade that would follow is where such crossovers would really explode in popularity though with everyone using the gimmick to a greater or lesser degree. Batman alone would crossover with Judge Dredd, Predator, Grendel, Spawn, Punisher, Spider-Man, Captain America, Daredevil, Aliens, Hellboy, Tarzan and The Darkness, not counting his appearance in the Amalgam crossover events. Predator from Dark Horse would also meet Magnus, Robot Fighter while Valiant Comics and Image Comics would collide in Deathmate, Charles Barkley would meet Godzilla, the Turtles would continue to encounter everyone while Archie Andrews would run into the Punisher. Independent books like Razor and Shi would follow the trend as would Hellina and Double 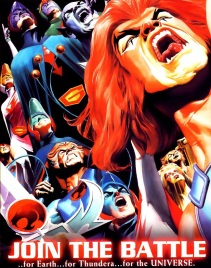 Impact. Marvel would buy Malibu and those two universes would mash together in numerous crossovers while Top Cow and Marvel would also meet in Devil’s Reign while the rest of Image’s various stables would team-up with everyone from DC, Marvel and beyond.

The next two decades would bring much of the same, as the gimmick of having two or more properties collide that one would not expect still being a thing of wonder and curiosity, as well as having that added bonus of hopefully selling a lot of copies and maybe, just maybe, making the subject’s core books get a little boost in numbers too. For many of them, they would feature crossovers that

some would never expect to see with companies throwing everything in the pot including the kitchen sink and for the most part, they would end up being a lot of fun. Vampirella would meet everyone much like Batman had already done, The Savage Dragon having met the Teenage Mutant Ninja Turtles previously would go on to meet Madman and The Atomics. Witchblade and Superman were all over the map while the Wildstorm characters crossed over with anyone who asked. Aliens, Predators, Thundercats and more would have some interesting hook-ups while Dynamite would get into the game with all of their properties colliding not only with other company IPs but their own as well no matter how ridiculous it would seem like the KISS/Army of Darkness crossover. Licensed properties would also get in the game, much of them courtesy from the aforementioned Dynamite, but also from the likes of IDW where the Transformers would come into contact with the Avengers and Star Trek, and from Boom where the Mighty Morphin Power Rangers would start to make a dent in the marketplace.

Whatever the reason for them, whether to have a bit of fun, to make a little money or to gain some exposure for a certain 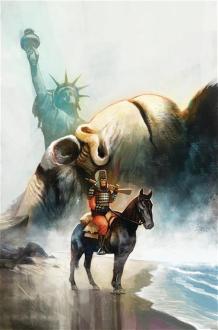 character, publishers continue to use this gimmick to its fullest but like everything though, it is all down to a matter of taste. For what might seem like a misstep in Infestation from IDW or Barbarella/Dejah Thoris at Dynamite, there is something wonderful like Kong on the Planet of the Apes or Archie vs. Predator. There is even the absurd which can generate a lot of enjoyment like Mars Attacks Judge Dredd, Batman ’66 Meets Steed and Mrs. Peel and Wonder Woman/Conan the Barbarian among many others.  Again though, not everyone might like this character or that one and no matter how good a story might be, it simply will not appeal to the reader.  Maybe someone really liked Infestation and hated it when one of the Predators went to Riverdale.  If somebody only reads Superman, for instance, they are less likely to get excited by Warrior Nun Areala crossing over with Avengelyne than somebody that already reads their books.  The fact of the matter is, there have been so many crossovers at this point, there is bound to be at least one that appeals to every reader out there.

As it is, most gimmicks usually fade away but they never really disappear and as for the crossover, that is one that will remain until there are no more comic books being published. As for whether they are good or even great is ultimately up to the reader as they vote with their dollars and should said readers continue to purchase them, companies will continue to put them out no matter how popular or unpopular they might be, truly a vicious cycle – but a good one. All it takes is for someone somewhere to think about bringing two properties together like Green Lantern and Silverhawks and they are sure to find interest from somebody. 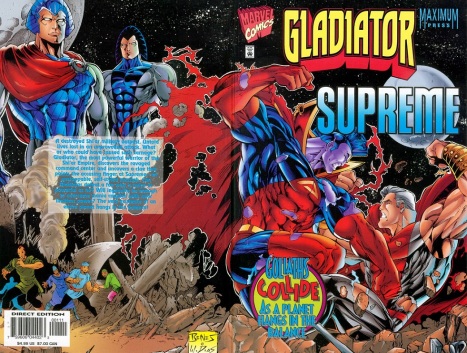 A final note – Most crossovers never get reprinted due to the complexities of doing so, some do and many have, but they rarely ever get a second printing so if there is a crossover one is interested in like that Gladiator/Supreme one-shot… pick it up.

Some favourites that came out over the years worthy of being hunted down are:

Predator vs. Magnus, Robot Fighter
Darkseid vs. Galactus: The Hunger
Avengers/Ultraforce
Batman vs. Predator
Conan vs. Rune
Grifter/Shi: Final Rites
Deathblow and Wolverine
Devil’s Reign
Tarzan vs. Predator: At the Earth’s Core
WildC.A.T.s/X-Men
Batman/Tarzan: Claws of the Cat-woman
The Incredible Hulk vs. Superman
Ghost/Batgirl: The Resurrection Machine
JLA/Avengers
Vampirella/Aliens
Tarzan on the Planet of the Apes
The Twilight Zone: The Shadow
Batman/The Shadow
The Shadow/Batman
Predator vs. Judge Dredd vs. Aliens
Kong on the Planet of the Apes
Black Hammer/Justice League: Hammer of Justice

Check out these links for more gimmicks and goodness:

Chris is on Infinite Earths: Adventures of Superman #500

Between The Pages: Guerilla Marketing

When It Was Cool: Polybag It! The Blight of the Polybagged Comic Book

DC in the 80s: Gimmick Comics