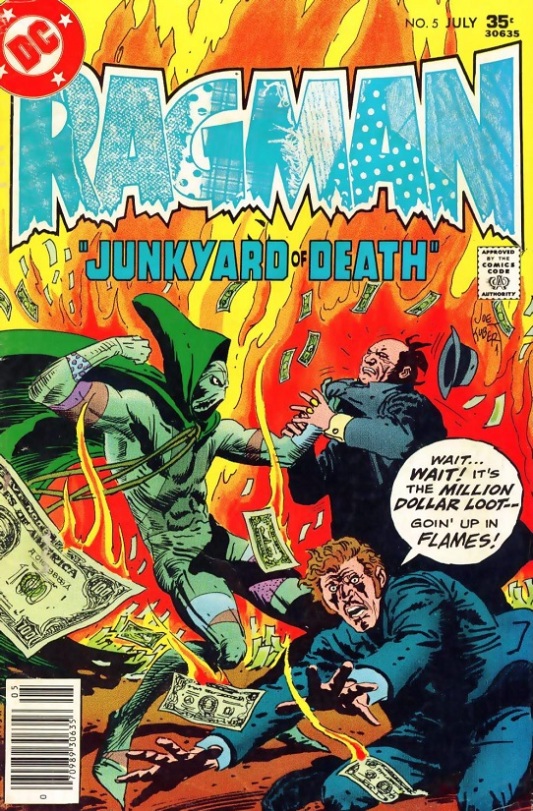 The fifth and final issue of Ragman by Robert Kanigher and Joe Kubert begins with a recap of Rory Regan and Ragman’s origin, of how his father and his friends died at the hands of some thugs looking for money and of how their strengths entered him through some kind of weird fate. The book then cuts to the present where Ragman is protecting his city from the criminal element while the group called The Organisation is looking to reclaim the missing money, the spoils of a robbery that they know to be in Rory’s junkyard somewhere. The crooks make a plan to capture Opal, the woman seen earlier on in the series, rescued by Ragman and a woman they know he will try to rescue again. As the plan is put in motion, it works better than they had hoped, but also to their regret for when bullets fly wild, they strike Opal and Ragman makes sure that they never hurt another person again. There is a moment in the book when Rory is back at his place, helping an old man who is just trying to get warm when Bette and Teddy show up and she proposes that they get married and adopt Teddy. It is a sweet moment, but a sad one for while it makes complete sense, the people of the community depend on Rory and he cannot leave them. If there was one plot thread that Kanigher and Kubert should have tied up in this book, it was that one as it tugs at the heartstrings of the reader and while one cannot help but feel bad for Teddy, knowing what Rory does, it is somewhat understandable. There is also the matter of the stolen money, the cash that Rory’s father had said would make him a rich man and that which The Organisation is looking for. That at the very least is dealt with and while it puts a pin in the story of the crooks, it also cements Rory’s place in the world meaning it will be at his junk shop that he will remain. Altogether this was a fantastic series with almost lyrical writing by Kanigher and fantastic artwork throughout. It is a shame that it would finish after only five issues, but at least it would have an ending of sorts, one that readers could live with but one that would make them imagine what could have been.